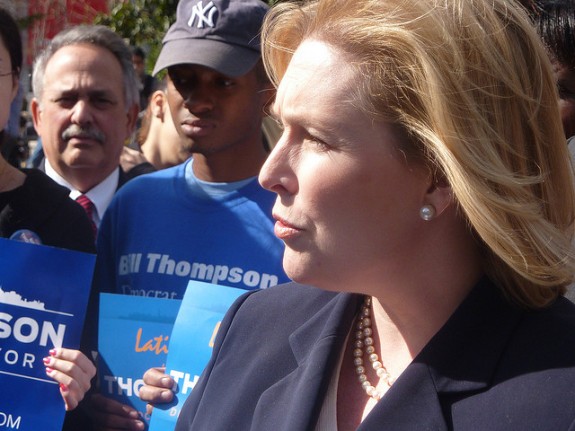 Sen. Kirsten Gillibrand (D-NY) is one of the letter’s 22 signators.

As it becomes increasingly evident that Congress is too mired in politics to reform our broken immigration system, a steady chorus demanding executive action is growing. This week, 22 U.S. Senators, including Majority Leader Harry Reid, sent a letter to President Obama asking him to grant “deferred action”─a stay from deportation─to DREAM Act-eligible students.  The letter follows a campaign by immigrant rights and advocacy groups earlier this month calling on the Obama Administration to use executive authority to reform immigration policy.

Referencing the Bush Administration’s use of prosecutorial discretion, 22 members of Congress urged President Obama to use his executive authority to provide relief in a letter sent Wednesday. They write:

You are the nation’s chief law enforcement officer and are, of course, obligated to enforce the law.  However, the exercise of prosecutorial discretion in light of law enforcement priorities and limited resources has a long history in this nation and is fully consistent with our strong interest in the rule of law.  Your Administration has a strong record of enforcement, having deported a record number of undocumented immigrants last year.  At the same time, you have granted deferred action to a small number of DREAM Act students on a case-by-case basis, just as the Bush Administration did.

We would support a grant of deferred action to all young people who meet the rigorous requirements necessary to be eligible for cancellation of removal or a stay of removal under the DREAM Act.

Although the enforcement-only crowd loves to claim that the President’s use of executive authority would be an attempt to make “end-runs” around Congress, the American Immigration Council highlighted the “important and completely legitimate role the Executive branch of government has always played in interpreting and implementing existing laws” in a statement issued this week. The Council also urged the Obama Administration to stop insisting its hands are tied when it comes to immigration.

In the absence of federal reform, voices calling on President Obama to take action will only continue to grow. In addition to authorizing the Department of Homeland Security to grant deferred action for all DREAM Act students, there are a wide range of other steps that can be taken to fix of our immigration system. Time, however, is running short─not only for the immigrants who are caught in limbo, but for a President to define his legacy on immigration.