President Obama Leads Meeting on Immigration, But What Happens Next? 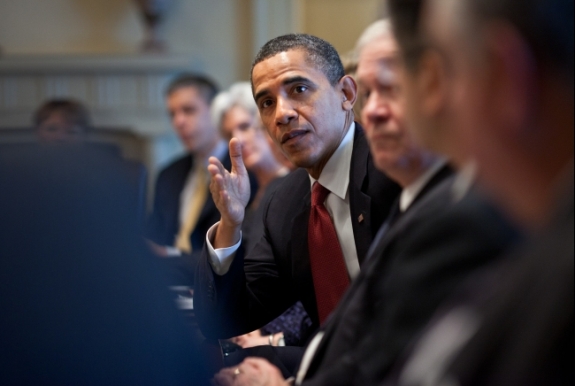 According to the readout, the President expressed disappointment over Congress’s failure to produce comprehensive immigration reform (CIR), or even components of CIR like the DREAM Act, and enumerated the many problems resulting from our broken system—families torn apart, shipping talent overseas, wage equity and work eligibility issues, etc. In the same meeting, the President also asserted that the “Administration continues to improve our legal immigration system, secure our borders, and enhance our immigration enforcement so that it is more effectively and sensibly focusing on criminals.” Many reports, however, argue that administrative reforms thus far have not been ambitious enough, or as effective as the White House claims.

And once again, the President seems to be pinning all future immigration relief on Congressional action—stating that “the only way to fix what’s broken about our immigration system is through legislative action in Congress.” While passage of comprehensive immigration reform is certainly necessary to fix the outdated and dysfunctional legal immigration system, there is much more that the President can do now—within his executive authority—to grant relief to families and communities that are being torn apart by the administration’s enforcement initiatives.  President Obama has a vision of a fair and humane immigration system, and he needn’t wait for Congress to impose his vision on the system.

There is no doubt that the national debate on immigration needs to be broadened. Yesterday’s meeting—which encouraged Democrats, Republicans, faith leaders, law enforcement, business leaders and others to reach some level of consensus on what is needed to fix the system—was certainly another positive step toward a constructive and rational conversation. At the same time, however, in the absence of broader Congressional reform (which some leading Republicans have already “doomed” this session) pressure is mounting for the President to acknowledge that there is more he can do—within the limits of current law and executive power—to enforce and execute all immigration laws, not just the ones that deport people. Without any action at all, those caught up in our broken system will only continue to languish and our problems worsen.