One Year After SB 1070, States Are Still Grappling with Cost of Immigration Measures 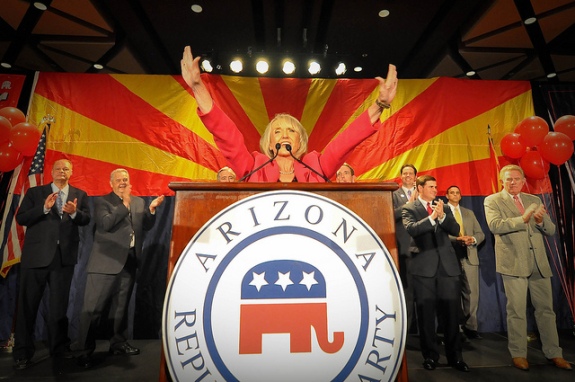 One year ago this month, Arizona Gov. Jan Brewer put her star on the political map when she signed SB 1070, a controversial immigration law which required state and local law-enforcement officials to inquire about immigration status during any lawful stop, detention, or arrest. Some states learned from Arizona—the numerous protests, Supreme Court challenge, costly litigation, economic boycotts that are still costing state businesses millions—and rejected similar laws. Other states, however, are still pushing for immigration enforcement measures despite the continued outcry from businesses and local groups about how these bills will hurt their state.

Last week, Georgia passed Arizona copycat bill HB 87, even after the Georgia Farm Bureau, Georgia Agribusiness Council and the Georgia Urban Ag Council urged lawmakers to kill the bill—a bill they have repeatedly warned will hurt the state’s $68.8 billion agricultural industry. Although Governor Nathan Deal has yet to sign the bill, he recently announced to the Atlanta Journal-Constitution that he intends to pending further review.

This week, however, the Atlanta City Council asked Gov. Deal to reconsider signing HB 87 for fear of the “serious financial blow” it will cause “the city’s multi-billion-dollar tourism and convention business.” Several community groups have threatened an economic boycott of Georgia. The Atlantic Convention and Visitors Bureau also expressed concern over HB 87’s impact on the state tourism. According Bureau president, William Pate:

“Travel and tourism is a $10 billion dollar industry in Atlanta and we share the council’s concern that this bill could adversely affect our convention business and our economy,” Pate said.

Meanwhile, lawmakers in Indiana officially stripped their immigration bill (SB 590) of SB 1070-style provisions this week under mounting pressure from state businesses. The bill, which passed the House 64-32 this week, now focuses on tax penalties for employers that knowingly hire unauthorized immigration, which supporters of the original bill say is not enough. Indiana Governor and rumored 2012 Presidential hopeful, Mitch Daniels, said he wanted the bill to focus more on employers rather than Arizona-style enforcement measures.

Alabama’s Senate passed Arizona copycat bill (SB 256) this week, despite fears that the state will not seem friendly to businesses. (Alabama’s House recently passed a similar bill (HB 56) which must now be reconciled with the Senate version.) Shay Farley of Alabama’s Appleseed Center for Law and Justice worries about how much Alabama will have to spend to implement and defend these measures, given the economic backlash in Arizona. Similarly, Jason Childs at the Center for Progress worries that this law will mare Alabama’s reputation as being open to business.

A chorus of critics in Florida—including the Chamber of Commerce, the Associated Industries of Florida, the Florida Fruit and Vegetable Association, farmworker advocates and faith groups—recently voiced opposition to the state’s immigration measures (HB 7089 and SB 2040). Although billed by proponents as different than Arizona’s law, HB 7089 actually makes unlawful presence in Florida a state crime punishable with jail time and a fine.

Adam Babington, Vice President of the Florida Chamber of Chamber, said these laws, which are moving through the state legislature, will “scare off tourists from Latin American and the Caribbean who contribute billions to Florida’s economy and millions to state coffers.” The Florida United Business Association also asked lawmakers not to make Florida employers act as immigration officials while Florida immigration advocates are threatening to sue the state should these measures become law.

And in Tennessee, where a series of bills targeting unauthorized immigrants is moving through various committees, immigrant rights groups are quick to point out that Arizona’s laws have cost the state “$150 million in revenue”—a fate Tennessee is likely to share. Stephen Fotopulos of the Tennessee Immigrant & Refugee Rights Coalition said that these immigration laws would give Tennessee an “economic black eye” and put them “on a list of places hostile to the immigrant entrepreneurs and international investors” who, according to the state’s Department of Economic and Community Development, have created 134,000 jobs in the state.

In fact, Fotopulos sums up the sentiments of many in states still considering immigration bills:

“In this economy, it’s hard to imagine our representatives would drastically expand the role of state government and impose costly new burdens on taxpayers.” Fotopulos said. “Our representatives need to realize that we are not Arizona, and we don’t want to be.”