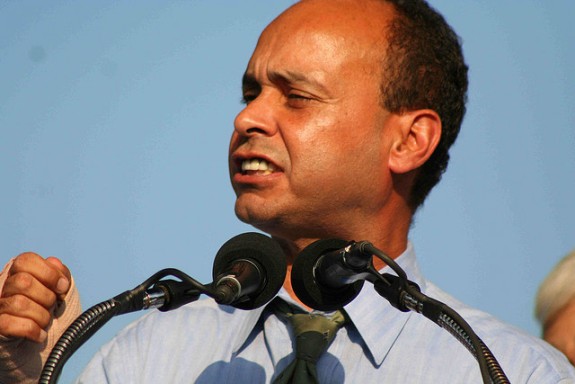 In his latest effort to drum up bipartisan support for immigration reform in Congress, President Obama met with the Congressional Hispanic Caucus (CHC) yesterday at the White House. Similar to other meetings in recent weeks (with national and state leaders, Latino celebrities and an immigration-themed commencement speech at Miami-Dade College), the President reiterated that his hands are tied on reform without Congressional action. But in yesterday’s meeting, the CHC asked the President to untie his hands and “use the administrative powers he has under existing law to provide relief to certain groups of immigrants facing deportation.”

According to Rep. Luis Gutierrez (D-IL), an outspoken advocate and member of the CHC, the issue is no longer a matter of can the President exercise executive authority on immigration, but will he and to what extent:

It was a productive meeting and there is no longer a debate over whether the President has broad discretionary powers when it comes to deportations. The question is how broad and how generous the President chooses to be.

The meeting was not about granting legal status to the 12 million or so undocumented immigrants, but rather how to prioritize deporting drug dealers and gangsters, but not to deport DREAM Act students and the families of U.S. citizens.

Rep. Gutierrez recently embarked on a 20-plus city tour highlighting stories of families torn apart by deportations, often lambasting the President for not using executive authority to fix parts of the system—a sentiment shared by lawmakers and advocacy groups.

In fact, immigration experts have laid out numerous examples of how Presidents, under the law, have and can utilize executive branch authority with respect to the implementation of immigration laws and policies—including deferred action on certain immigration cases, deferred enforced departure and humanitarian parole for certain vulnerable individuals.

The White House did, however, state during the meeting yesterday that they would try to find ways to concentrate enforcement resources on criminals “so that we are not using our limited resources on those potentially eligible for an adjustment of status.” But then the Administration has touted this prioritization before and, according to critics, continues to fall short.