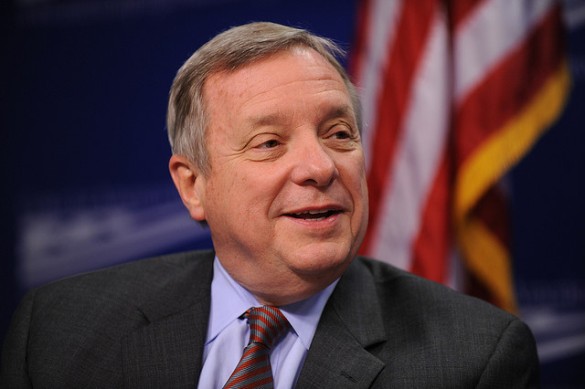 Today, Senators Richard Durbin (D-IL), Harry Reid (D-NV) and Robert Menendez (D-NJ) re-introduced the Development, Relief, and Education for Alien Minors Act, or “DREAM Act,” which would provide a pathway to legal status for the thousands of undocumented students who graduate from high school each year (the companion bill in the House was also introduced today). This introduction comes on the heels of President Obama’s speech on immigration in El Paso, where he stated that “we should stop punishing innocent young people for the actions of their parents. We should stop denying them the chance to earn an education or serve in the military. And that’s why we need to pass the DREAM Act.”

Last year, the DREAM Act came within a few votes of becoming law, passing the House before failing to gain enough votes for cloture in the Senate. This year, states have kept up the fight—most recently both Maryland and Illinois passed their own versions of the DREAM Act—allowing unauthorized students to pay in-state tuition. Other states are set to follow their lead, but it is important to note that without the federal DREAM Act introduced by Senator Durbin, these students would still never be able to legalize their status. As Senator Durbin noted today upon introduction, the DREAM act “is not just a piece of legislation. It is a matter of justice.”

The plight of the DREAM Act students encapsulates many facets of today’s immigration crisis. Caught in a system where there is little, if any, means for legalizing their status, smart, hard-working kids face an uncertain future because of their inability to continue their education, work, or join the military. The loss of potential, productivity, and hope for these individuals is also a loss for this country. The United States is missing out on talented workers and entrepreneurs, and is losing vital tax revenues and other economic contributions.

The DREAM Act has been around since 2001, when it was introduced by Senators Durbin and Orrin Hatch (R-UT) in the Senate and Representatives Howard Berman (D-CA) and Chris Cannon (R-UT) in the House. The current bill allows current, former, and future undocumented high-school graduates and GED recipients a pathway to U.S. citizenship by obtaining a college degree or serving two years in the armed services. They must also have come to the U.S. before turning 16, be under the age of 35, have lived in the U.S. for at least five years, and have “good moral character.” The bill is supported by 70 percent of American voters, and has 32 sponsors and co-sponsors in the Senate.

President Obama re-stated his commitment to fighting for the DREAM Act, and is sympathetic to the plight of these students, many of whom were brought here at a young age by their parents and know no other country than the U.S. As the President stated yesterday in El Paso:

It broke my heart knowing that a number of those promising, bright students — young people who worked so hard and who speak about what’s best in America — are at risk of facing the agony of deportation. These are kids who grew up in this country. They love this country. They know no other place to call home. The idea that we’d punish them is cruel. It makes no sense. We’re a better nation than that.

The President, however, does have the authority to change the fact that we deport these promising young students, despite the fact that he cannot pass the DREAM Act by himself. The President has the authority to instruct DHS officers to exercise discretion and grant deferred action or other relief to DREAM Act eligible youth until the DREAM Act is passed. If the President truly believes that these children love this country, call it home, and are a vital part of our future, then he has no other choice than to do everything he can to provide them relief.

Photo by Center for American Progress