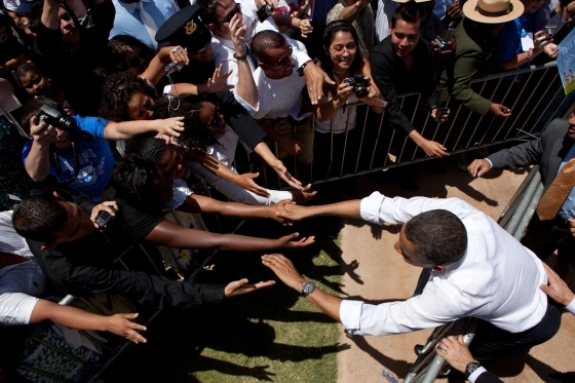 Plenty of people are calling this week’s events—especially the President’s speech on immigration in El Paso—pure politics. And some are rightly criticizing Administration policies—such as record levels of deportations—as inconsistent with the broader vision of immigration and economic prosperity the President outlined in El Paso. But placed in a broader strategic context, the El Paso speech moves the President’s strategy for immigration reform forward by utilizing the messages and tools that carried Barack Obama into the White House and helped him win his signature healthcare reforms.

The speech itself moved from the promise of America to the importance of immigration to expectations and responsibilities for each of the affected players. Echoing a theme that he first made public in his State of the Union Address, the President centered immigration firmly within an economic framework, as something that affects the prosperity of everyone in America. Although the speech was given at the border, it was clearly designed to say we are done with making immigration about border enforcement and we are moving on to immigration as a component of our future.

You have to go beyond the speech to really appreciate this point, however. The blueprint released concurrently with the speech is a far more explicit outline of what the White House supports. It’s an outline of legislation with a heavy emphasis on the importance of immigrants as taxpayers and innovators and the impact that immigration has on our economy. Consequently, it contains more specific proposals for fixing the broken legal immigration system than we have seen from the White House to date.

The White House also launched an online toolkit to give people around the country a chance to participate in the immigration debate and is sponsoring a host of roundtables and other events to engage the public on the issue.

Yes, this is politics, but the kind that the Obama administration excels in. If it works, more people who support immigration reform will start to look at immigration as an important and necessary element of keeping our economy and our country on track. They will start asking their elected officials why they haven’t done anything all these years and why they have turned an economic issue into one that has for far too long been about race and prejudice and fear.

This is a good strategy that can help win the broader legislative goals of comprehensive immigration reform eventually, but it isn’t the only front the Administration has to engage in. Like it or not, the President can’t avoid dealing with the fallout of some of the DHS policies that have led to greater deportations and more separations of families than ever before. At the same time the White House tries to convince the general public that immigration reform is necessary, it must put more efforts into using its powers to reform DHS administratively. As a recent report by the Immigration Policy Center points out, while there have been some administrative reforms, the failure to use discretionary authority to help DREAM Act students, end deportations to Haiti, or keep families together by revisiting policies on hardship waivers, makes it hard for many people who have worked tirelessly on this issue for years to really believe the White House is serious.

That’s a shame, because the immigration community needs the White House muscle of a big picture legislative game, but the White House needs the immigration community, too. And as heartfelt and moving as the President’s recent speeches have been, he won’t completely win people over without addressing the problems at DHS. That may be too inside baseball for the general public for whom immigration reform is a good thing, but not yet something that directly touches their lives. But for the millions of people directly affected by the broken immigration system—whose children risk deportation after they graduate from high school, for instance—there has to be even more.