SCOTUS E-Verify Ruling No Bellwether for Fate of SB1070 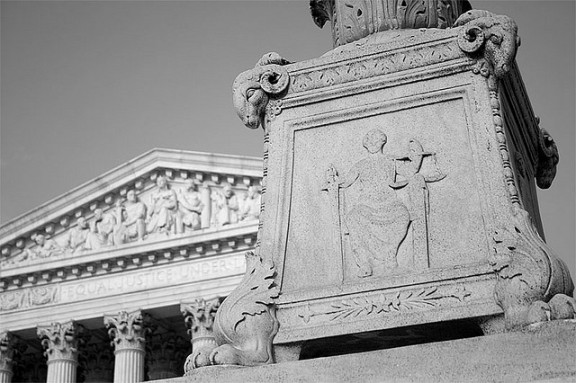 By Mary Giovagnoli and Melissa Crow

Even though challenges to both laws involve the idea of preemption—whether the federal government has the sole authority to make and enforce laws on a particular issue—the underlying laws in question are significantly different.

The Legal Arizona Workers Act was an effort to regulate the employment of undocumented immigrants by permitting the suspension or revocation of business licenses in the event that employers knowingly hired undocumented immigrants. A majority of the Supreme Court rejected the argument that Arizona had overreached, relying on a specific exception in the Immigration and Nationality Act that said that state governments retained the authority to regulate employment verification through licensing. That fairly narrow exception decided the case, despite strong arguments about the federal scheme for regulating immigration and the costs that a mandatory employment verification system imposes. This is unfortunate, but it doesn’t mean that supporters of SB 1070 should start celebrating. Today’s decision was more about employment than immigration. While states have historically possessed the power to regulate employers within their borders, they have no authority to regulate immigration itself. This is the exclusive domain of the federal government—and the issue at stake in the SB 1070 litigation.

SB 1070, after all, has as its express purpose to make “attrition through enforcement” the policy of the state. In other words, the state of Arizona decided in SB 1070 to make it so onerous for immigrants to live there that they would just leave. And while it was written to root out undocumented immigrants, the practical effect was to make anyone who appeared vaguely foreign or different the possible target of questioning and racial profiling. Moreover, it created criminal penalties for being in the state illegally, essentially layering another level of punishment on people regardless of federal law.

This is important, because Arizona’s SB 1070 essentially sought to replace federal immigration law with an even tougher standard. The only employment-related provision of SB 1070 sought to criminalize work by undocumented immigrants. The Ninth Circuit found this provision unconstitutional, in part because Congress decided to penalize employers, not employees, for the hiring of undocumented workers.

Today’s decision affirmed a prior ruling by the Ninth Circuit Court of Appeals that Arizona’s law was not preempted. By contrast, the District Court has already found SB 1070 to be preempted by federal law and the Court of Appeals found the arguments of plaintiffs so compelling that it issued an injunction, preventing the vast majority of the law from going into effect until the Court issues its opinion. Thus, two courts have already given support to the idea that there are broad issues of preemption here that weren’t under the microscope in the Whiting decision. Both the breadth and the substantive questions at issue in the two laws are radically different.

Nonetheless, today’s decision is an unfortunate one, as it will ultimately either drive more people underground, lead to more discrimination, or create more problems for Arizona businesses. Nor will mandatory E-verify solve the problems Arizona sought to address—attempting to regulate undocumented employment without providing a means for legalization is a no-win proposition. Until Congress passes comprehensive immigration reform that balances benefits and enforcement, E-verify alone will never win the day.