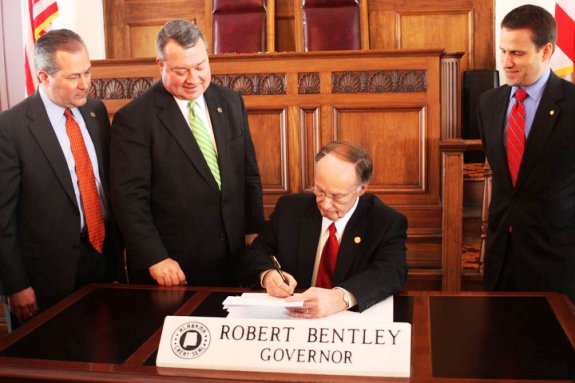 Yesterday, Alabama Governor Robert Bentley signed a restrictive immigration bill (HB 56) into law, making Alabama the fourth state to sign “get tough” Arizona-style immigration legislation. Among the restrictive provisions, HB 56 requires local law enforcement, in some instances, to verify the immigration status of those stopped for traffic violations, public schools to determine the immigration status of students, employers to use E-Verify and makes it a crime to knowingly rent to, transport or harbor undocumented immigrants.  Although Gov. Bentley touts the law as the nation’s toughest, he might also consider mounting a similarly tough legal defense as civil rights groups have declared their intention to file suit.

Shortly after Gov. Bentley signed the law, the ACLU issued a statement declaring their intention, along with several other civil rights groups, to challenge the law’s constitutionality. They called key provisions of the law—especially the provision requiring children to provide proof of citizenship at public schools—“an outrageous throw-back to the pre-Civil Rights era, going beyond the discriminatory and unconstitutional police practices that we’ve seen in other states. It blocks the schoolhouse doors to children, will result in people being turned away when they try to rent a home, and places burdens on people of color at the voting booth.” The law is slated to take effect September 1, 2011.

But even putting aside questions of constitutionality, this attrition through enforcement law is designed to drive undocumented population (estimated at around 120,000) out of Alabama—a population that, like it or not, contributes significantly to Alabama’s economy. According to one report, households headed by unauthorized immigrants in Alabama paid $130.3 million in state and local taxes in 2010. And if all unauthorized immigrants were removed from Alabama, another report estimates, the state would lose $2.6 billion in economic activity, $1.1 billion in gross state product, and approximately 17,819 jobs.  And that’s not even counting what the state would spend in legal fees defending the law.

Other states with similar “get tough” immigration legislation on the books—Arizona, Utah, Georgia and Indiana—are all facing costly legal battles. Arizona has already spent $1.9 million defending their law, key provisions of which were blocked by a federal judge. Not to mention the millions Arizona has already lost in cancelled conferences.

Clearly, Arizona has shown us that using a “get tough” immigration law to drive undocumented immigrants out of the state is not only costly, discriminatory and unconstitutional; it’s also ineffectual in actually addressing larger immigration problems. Instead of demanding documentation from children, Alabamans concerned with fixing our broken immigration system should be putting pressure on their Congressional members to support national reform legislation—legislation that would get undocumented immigrants right with the law and on the books.