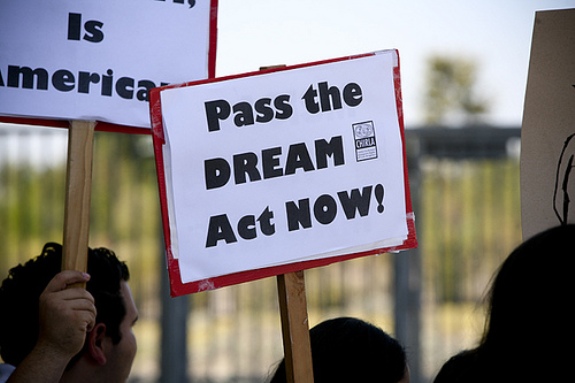 Today, the U.S. Senate held its first ever hearing on the Development, Relief, and Education for Alien Minors (DREAM) Act. Witnesses such as Department of Homeland Security Secretary Janet Napolitano, Secretary of Education Arne Duncan and Dr. Clifford Stanley, Under Secretary of Defense for Personnel and Readiness, testified to an overflowing Senate hearing room. The hearing renewed hope that despite a failure on the part of the Senate to pass the DREAM Act last year, Congress may yet be willing to help these deserving young adults fulfill their potential and contribute to the U.S.

Only the most cynical politician could claim that the DREAM Act is being used as a political tool after hearing the testimony of Ola Kaso, an unauthorized immigrant from Albania. Ola was brought to the U.S. at a young age by her mother, who was trying to find a better life for her and her family. Ola struggled to integrate into U.S. society at first, but by the end of high school, she had a 4.4 GPA and was a varsity athlete in both tennis and cross country. She became treasurer of both the Senior Class Student Council as well as her school’s chapter of the National Honor Society. She received numerous scholarship offers and was accepted by several universities including the University of Michigan. Yet, despite all of her achievements, Ola was ordered to be deported to Albania (despite not being fluent in Albanian) the March before her high school graduation. Luckily, Ola’s community rallied around her and was able to get DHS to grant her deferred action for one year while she continued her education. However, many DREAM Act students are not so lucky.

The DREAM Act not only accomplishes humanitarian goals like keeping deserving and innocent young students from being punished, but also allows bright young adults to contribute to the U.S. economy. A 2010 study by the UCLA North American Integration and Development Center estimated that the total earnings of DREAM Act beneficiaries over the course of their working lives would be between $1.4 trillion and $3.6 trillion. More earnings over the course of their working lives means another way that the U.S. can seek to reduce its deficits. In fact, the Congressional Budget Office (CBO) estimated that the House version of the DREAM Act (H.R. 6497), as introduced on December 7, 2010, “would reduce deficits by about $2.2 billion over the 2011-2020 period.”

After being pressed by Senator Chuck Grassley (R-IA), DHS Secretary Napolitano made clear that in the absence of the DREAM Act, there would be no categorical “amnesty” for DREAM Act eligible students. But on June 17, the Obama administration took a small step that may benefit some DREAM Act students. In a memo from Immigration and Customs Enforcement (ICE), Director John Morton outlined 19 factors (ranging from age and when someone came to the country to community ties) that ICE officials should weigh when deciding whether to prosecute an immigration case. While there is no categorical pronouncement that all DREAM act students shall receive deferred action, the Obama Administration is at least signaling that these types of cases merit an individualized assessment.

Small steps like this memo and the continued push on the part of Sen. Richard Durbin (D-IL) for the DREAM Act give hope that Congress will soon realize the obvious fiscal and humanitarian benefits of keeping these bright young adults in the United States.