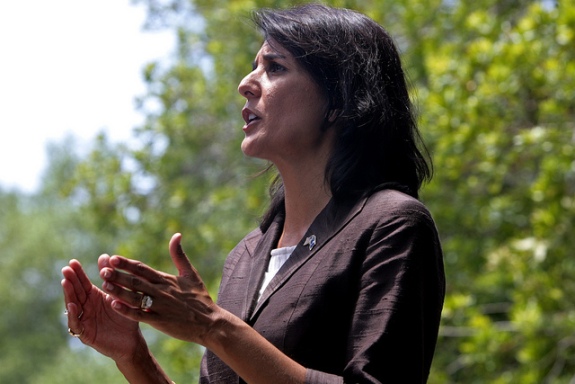 This week, on the same day that a federal judge enjoined key provisions of Georgia’s immigration law, South Carolina Governor Nikki Haley signed an Arizona-style immigration bill into law. To date, federal judges in four states (Arizona, Utah, Indiana and Georgia) have blocked key provisions of their Arizona-inspired immigration laws, arguing that these laws unlawfully interfere with federal authority over immigration matters. So what makes South Carolina any different? Nothing, except for the $1.3 million price tag in addition to the cost of implementation and legal fees incurred from defending the law.

On Monday, Gov. Haley signed S 20, a law which requires law enforcement in South Carolina to call federal authorities if they reasonably suspected a person they’ve stopped, detained or arrested is in the country without documentation. The law, which also requires employers to use E-Verify to check the citizenship status of new hires and existing employees, creates a special unit of immigration law enforcement officers—a unit estimated to cost the state $1.3 million.

And South Carolina can expect to spend even more defending the law against costly legal battles. The ACLU and National Immigration Law Center said they will sue South Carolina, as they have in other states, on the grounds that law’s provisions “sanction discriminatory and unconstitutional practices by police officers and employers by inviting racial profiling of Latinos and others.” To date, Arizona has spent upwards of $1.9 million in legal fees defending their law.

Farmers in South Carolina are also worried that the new law will hurt the agriculture industry, making it harder for farmers to find workers, whom they worry will stay away from the state “for fear of harassment just because they’re from Mexico.” One farmer said that Gov. Haley “may get what she wants in keeping illegal immigrants out of South Carolina but it may keep the legal immigrants out too.”

That’s a heavy price to pay for a law that attempts to regulate what many judges agree is a federal issue. In a recent hearing, U.S. District Judge Thomas Thrash, Jr.—who enjoined key provisions of Georgia’s immigration law this week—commented:

Barring a block by a federal judge, South Carolina’s immigration law will go into effect January 1, 2012.