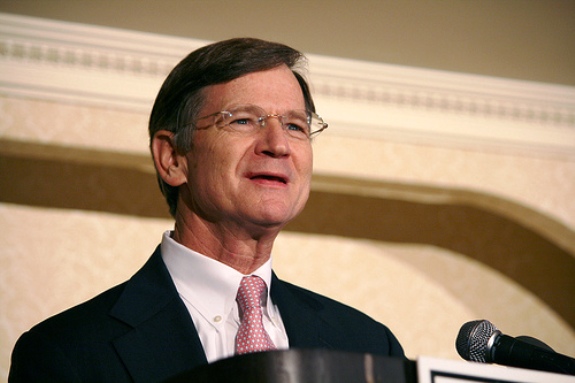 Over the last six months, Congressman Lamar Smith (R-TX), along with other members of the House Judiciary Committee, have engaged in an all-out effort to turn back the clock on our immigration laws through a series of bills that may tackle one issue at a time, but equal a comprehensive overhaul. This week, the restrictionists’ Comprehensive Immigration Reform package (RCIR, as we call it) became complete with the introduction of the “Hinder the Administration’s Legalization Temptation Act” (HALT Act), a bill that would suspend discretionary forms of immigration relief until January 21, 2013. Yes, until the day after the next inauguration.

Just yesterday, Congressman Smith inched a bit closer to RCIR when the full Judiciary Committee voted to advance the “Keep Our Communities Safe Act of 2011” (H.R. 1932)—a bill that authorizes indefinite detention for immigrants. Apparently Smith is not content with the current mandatory detention laws because they include some provisions for release of immigrants, such as asylum seekers and others who have committed no crimes. His bill, however, would create a penal system for immigrants far more restrictive than the current detention system, which has generally been under fire from all sides.

And it doesn’t stop there. Other bills in the RCIR package include mandatory E-verify with no provisions for current undocumented workers to become legal, elimination of the diversity visa, expanded authority for the Secretary of Homeland Security to revoke visas issued by the Department of State, the elimination of review for those visas, suspension of waivers for the 3 and 10 year bars, suspension of cancellation of removal, suspension of Temporary Protective Status(TPS), suspension of virtually all parole authority, deferral powers, and work authorization, and a revocation of any such benefits that are awarded between the date of introduction of the HALT Act and its enactment.

Taken together, this package of proposals does more than enshrine the status quo. It literally rewrites the 1996 immigration laws that Smith himself authored. He has justified the HALT Act, in particular, as an attempt to head off possible “backdoor amnesty” by the Obama Administration, fearing that Obama would use his executive branch authority to defer the removal of thousands of DREAM Act eligible students and other vulnerable persons caught in the crush of our broken immigration system. Despite the fact that A) the Obama Administration has repeatedly said it had no plans to use its authority in this way (even though it certainly could) and B) Smith himself asked then Attorney General Janet Reno to exercise prosecutorial discretion in a 1999 letter, Smith continues to let loose one hysterical tirade after another any time the possibility of any relief for any immigrant is suggested.

The tremendous irony of the HALT Act, however, is that it actually reinforces the President’s authority to take action by highlighting the number of areas where discretion currently exists in existing immigration law. His fear that the President might act has led him to relentlessly strip away every possible discretionary action except that of declining to put people in immigration proceedings (and even that he attempted to curtail by suspending formal deferred action authority and eliminating work authorization in the case of deferrals). In his efforts to block the Obama Administration at every turn, he has excised the notion of discretion from the immigration laws, but in doing so he has pointed out just how necessary discretion is.

For instance, the HALT Act would suspend all grants of TPS between now and January 21, 2013. Heaven forbid that a natural disaster or civil war breaks out anywhere in the world because under the HALT Act, we would be powerless to help victims—like we did for Haitians after a devastating earthquake—stranded in the U.S. Similarly, by suspending cancellation of removal, Smith strikes at one of the very few safety valves currently in the system—a provision of relief that has existed in some form since at least the 1952 immigration law by which an immigration judge determines that someone was removable but also finds that he or she merits suspension of that removal and permanent resident status based on compelling humanitarian circumstances.

Moreover, the HALT Act would eliminate even the potential for family members to be reunited who are subject to the 3 and 10 year bars. For example, if your spouse entered the country illegally, met you, fell in love, and wanted to get right with the law, there would be absolutely no way that he/she could obtain legal status unless he/she waited outside the country for 3 to 10 years. Despite the fact that Congressman Smith’s own 1996 law created both the bar and the waiver, the Congressman thinks that it is better to keep everyone from even having a chance to reunite in order to punish the Obama administration.

The restrictionists’ CIR package really only leaves one recourse—mass deportation—which would be both impractical and expensive given that a mass deportation is estimated to cost at least $285 billion over five years. As the U.S. teeters on the brink of another financial crisis, the irresponsibility and craven politics of the HALT Act and the restrictionists’ CIR package is a sad reminder that a broken immigration system requires solutions that embrace discretion, not eliminate it.