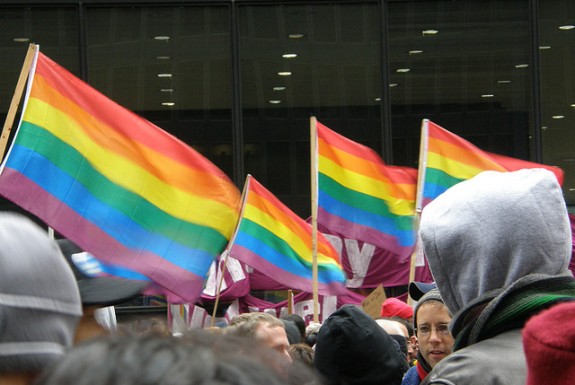 Yesterday, the Department of Homeland Security (DHS) announced that they would take concrete steps to implement existing guidance on prosecutorial discretion in an attempt to provide relief for low priority immigration cases. DHS also announced that a new committee will review 300,000 immigration cases currently in removal proceedings to determine which cases are low priority and can be administratively closed. Some of the factors used in determining low priority cases are family relationships and community ties—factors the Administration said yesterday may apply to gay and lesbian families.

Bradford Wells and Anthony John Makk, a gay couple from San Francisco who have been married for seven years, know well the limitations on federal immigration reliefs for same-sex bi-national couples. Makk, a citizen of Australia and sole caregiver to his sick spouse, Wells, applied for permanent residency but his application was denied in a decision based on the Defense of Marriage Act (DOMA). Wells is infuriated. “It’s upsetting,” Wells said. “I have no power, no right to keep my husband in this country. I love this country, I live here, I pay taxes and I have no right to share my home with the person I married.”

There are currently 36,000 same-sex bi-national couples in the United States, many of whom are routinely denied applications for lawful permanent residence and other relief from deportation due to the Defense of Marriage Act (DOMA). Enacted in 1996, DOMA prevents the federal government—including DHS—from recognizing marriages or civil unions of same-sex couples for purposes of receiving federal benefits. Although the Administration determined that Section 3 of DOMA was unconstitutional, DHS is still denying immigration benefits to same-sex spouses of bi-national couples.

But couples like Makk and Wells may not be out of options just yet. According to DHS’s announcement yesterday, some positive factors that will be used in identifying low priority immigration cases include family relationships and strong community ties, both of which Administration officials indicated may apply to gay and lesbian bi-national couples. According to Mary Kenney, Senior Staff Attorney with the American Immigration Council’s Legal Action Center:

After DHS’s announcement yesterday, we’re really encouraged and hopeful [the guidelines] will provide relief to an even greater number of people than have previously received that relief. While it’s not a solution to the problems and the severe discrimination that DOMA has inflicted, it will hopefully set up a system for a much more comprehensive review of all cases which will give individuals an opportunity to really benefit on a much more systemic, equal playing field.

Many stakeholders—including DREAM Act students, gay and lesbian bi-national couples and others who may benefit from these guidelines—will be watching the Administration closely as they begin to review cases and implement the policy. Perhaps of the most concern to immigration advocates, however, is how the agency plans on implementing these guidelines to field offices and local law enforcement and what safeguards DHS puts in place to ensure the prosecutorial discretion guidelines are being followed.

The devil may live in the details, but folks have been suffering under our outdated and broken immigration system for far too long to get caught up in the lack of administrative follow through.