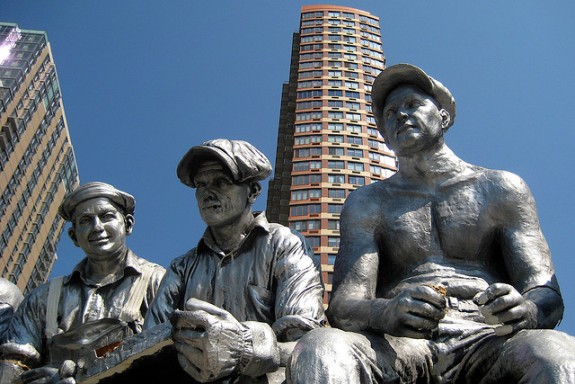 This Labor Day, we reflect on the many contributions workers make to the U.S.—including those of immigrant workers. While immigration restrictionists have long tried to demonize immigrant workers and blame them for high unemployment rates and other economic woes, the facts make it clear that immigrants actually create jobs and businesses and boost the wages of native-born workers. Research shows time and time again that immigration levels are positively correlated with economic output and growth.

Immigrants add to the economy in a number of ways:

Contrary to what many Americans believe, there is no evidence that immigrants work and contribute at the expense of wages for native workers.  In fact, a February 2010 report from the Economic Policy Institute (EPI) finds that the “effect of immigration from 1994 to 2007 was to raise the wages of U.S.-born workers, relative to foreign-born workers, by 0.4% (or $3.68 per week).” Even the small (and shrinking) number of “U.S.-born workers with less than a high school education saw a relative 0.3% increase in wages (or $1.58 per week)” as a result of immigration during this period.

This isn’t to say that the current system functions perfectly—far from it.  The employment-based immigration system created in 1990 hasn’t been updated for 21 years, and the antiquated and burdensome laws and regulations make it difficult for foreign workers to immigrate to the U.S.  There is evidence that more and more highly-skilled immigrant workers and entrepreneurs have decided to take their investments and skills to other countries that offer more attractive incentives.

This Labor Day, it’s important to think about how immigrants have and continue to contribute to our economy, but also about how our immigration system needs to change if America is to remain competitive in the global economy in the long run.