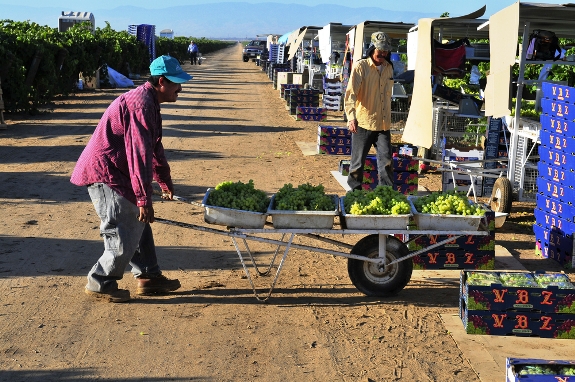 Rep. Lamar Smith (R-TX), Chairman of the House Judiciary Committee, has added a novel new twist to his anti-immigrant agenda: letting more immigrant workers into the country. In defiance of logic, the man who believes that immigrants merely steal jobs from U.S. citizens now wants to import migrant agricultural workers. At a hearing today of the House Subcommittee on Immigration Policy and Enforcement, Rep. Smith rolled out his latest legislative proposal, called the “American Specialty Agriculture Act” (H.R. 2847). The bill would create a new “H-2C” visa for temporary agricultural workers to replace the existing H-2A program, and would allow growers to bring in up to 500,000 of these workers each year.

Farmworker advocates have pointed out that the proposed H-2C program would gut wages and worker protections. They have also noted that Rep. Smith’s bill is a rather odd complement to his “Legal Workforce Act,” which was introduced in June. That bill would require all employers to use the still-flawed E-Verify program to check the work eligibility of new hires. On the one hand, Rep. Smith ostensibly wants nation-wide E-Verify in order to make jobs available to U.S. citizens that are currently held by unauthorized immigrants. On the other hand, he would allow growers to bring half a million temporary immigrant workers into the country per year.

This rather glaring contradiction has a very simple explanation: politics. The American Specialty Agriculture Act is an attempt by Smith to buy the support of growers for mandatory E-Verify. Growers have been none too pleased by Smith’s E-Verify bill, which would decimate their workforce; over half of which is unauthorized. Smith is hoping that, by offering up a bountiful supply of temporary migrant workers, growers will change their minds and accept mandatory E-Verify. This is a political gamble sure to enrage the anti-immigrant activists who comprise the core of Smith’s public support.

More importantly, Smith’s latest bill—like all of the others he has introduced over the years—does nothing to overhaul our broken immigration system in ways that might actually work. It doesn’t offer a realistic pathway to legal status for the roughly 11 million unauthorized men, women, and children who now call the United States home; three-fifths of whom have been here for more than a decade. It does nothing to reduce the backlogs that plague the family-based immigration system and needlessly delay family reunification. And it does nothing to create flexible limits on immigration that rise and fall with demand. Smith’s bill is a political ploy; not an earnest attempt to deal with very serious problems.