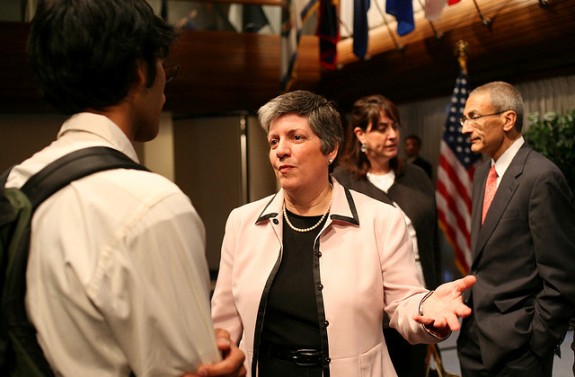 In a speech at American University yesterday, Secretary of Homeland Security Janet Napolitano complained that she was tired of criticism from the left and the right that accuse DHS of both blindly deporting undocumented immigrants and participating in attempts at amnesty through the use of prosecutorial discretion. Secretary Napolitano argued that both cannot be true, but that these conflicting criticisms signify the need for a “reality check” on the way we talk about immigration enforcement. Given the highly political attacks made on the Obama administration’s enforcement strategies in recent months—especially those made by restrictionist Rep. Lamar Smith—many are sympathetic to the need for a reality check. But that check must also include an honest look at all of DHS’s programs, even the problematic ones.

Secretary Napolitano bristled at criticism yesterday from across the political spectrum that not enough has been done to end deportations or improve the immigration system.  In particular, she took subtle aim at the numerous critics of Secure Communities. While acknowledging that DHS had done a bad job messaging the program, and that it needed some tweaks, she dismissed much of the legitimate criticism of Secure Communities.

Despite the misleading commentary about this program, it has proven to be the single best tool at focusing our immigration enforcement resources on criminals and egregious immigration law violators.

Termination of this program would do nothing to decrease the amount of enforcement. It would only weaken public safety, and move the immigration enforcement system back towards the ad hoc approach where non-criminal aliens are more likely to be removed than criminals.

This attitude doesn’t bode well for the numerous recommendations made by the Interagency Task Force on Secure Communities that were forwarded to the Secretary by the Homeland Security Advisory Committee in September. Even more disturbing, the Secretary seemed to lump all criticism of DHS enforcement into the same category, equating critiquing DHS with diluting efforts to obtain immigration reform:

We can all agree that we need fair, consistent, and enforceable immigration laws that encourage the free flow of commerce, while respecting both security and the rights of individuals. We will continue to work toward that common goal.

But we can’t do it alone—which is why I am calling on advocates on all sides of this issue to work with us and the Congress on these issues, rather than attacking the system, or the people who work in it, as a whole.

In other words, leave DHS alone and focus on Congress.

In the face of the growing hysteria on the right over the use of recent prosecutorial discretion guidelines, it is understandable that the Secretary feels the need to defend her decisions and approach. In the process, however, she signaled that she considers critics of DHS who seek more generous policies to be equally hysterical for “attacking the system.”

This is a mistake if only because most of the groups pushing for reforms within DHS have also pushed for reform within Congress for years. Lumping all critics together may feel “safe” in that Napolitano can’t be accused of playing favorites by the restrictionists who dog her every step, but it clouds and confuses her message.

If DHS is really proud of its accomplishments, it should welcome additional critiques of how to improve the system. Instead, the Secretary’s speech signals that constructive criticism is an obstacle to reform.