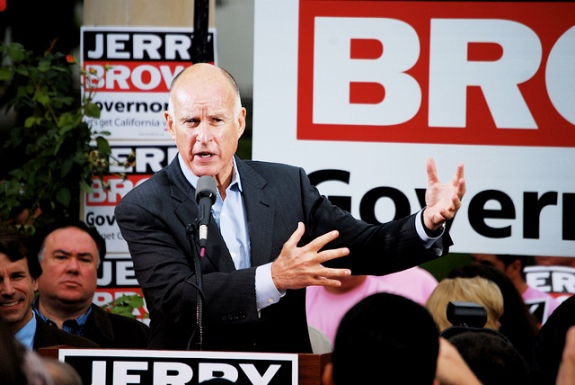 Take note, Alabama. Over the weekend, Governor Jerry Brown signed two immigration bills that seek to boost California’s struggling economy, rather than saddle it and small businesses with costly enforcement programs. Governor Brown signed the “Employment Acceleration Act of 2011” (AB 1236), a bill that prohibits the state from requiring employers to use E-Verify, as well as the other half of California’s DREAM Act (AB 131), a bill which makes college more affordable for undocumented students and “benefits us all,” as Gov. Brown says, “by giving top students a chance to improve their lives and the lives of all of us.”

The first bill, AB 1236, prohibits the state, cities or counties from requiring employers to use E-Verify, an electronic employment verification system that uses employees’ social security numbers to determine work eligibility. Exceptions are made, however, for city or county workers, or if E-verify is a requirement for particular employers under federal or  as a condition for employers receiving federal funds.

While supporters of mandatory E-Verify claim the system will magically open up millions of jobs to American workers, reports find that the program would actually cost California’s small businesses (which make up 99% of employers in the state) more than $312 million per year and potentially put 90,000 U.S. citizen and legal state workers out of a job. Nationally, mandatory E-Verify would cost small businesses $2.6 billion a year, according to Bloomberg News Service, and cost federal contractors $10 billion to implement. According to Assemblyman Paul Fong, AB 1236’s sponsor:

“This bill protects our California workers and businesses. The mandated use of E-Verify would impose a major financial burden on businesses, especially small businesses. In addition, businesses will suffer from delayed hiring and the cost of mistaken identities.  In this tough economy, we need to help businesses and grow and provide jobs, not set up barriers that cost jobs.”

In a statement, Gov. Brown said that “the Dream Act benefits us all by giving top students a chance to improve their lives and the lives of all of us.” According to the Public Policy Institute of California, the state will not have enough college graduates to keep up with economic demand by 2025. AB 131, however, could play a critical role in boosting the number of college grads, says the UCLA Institute for Research on Labor and Employment.

With an increasing unemployment rate of more than 12%, California legislators concluded that it “must pursue all avenues in facilitating and incubating job development and economic growth.” Hopefully other states will follow California’s lead by passing bills that grow local economies, rather than hurt local businesses with costly enforcement bills that end up costing American workers their jobs.