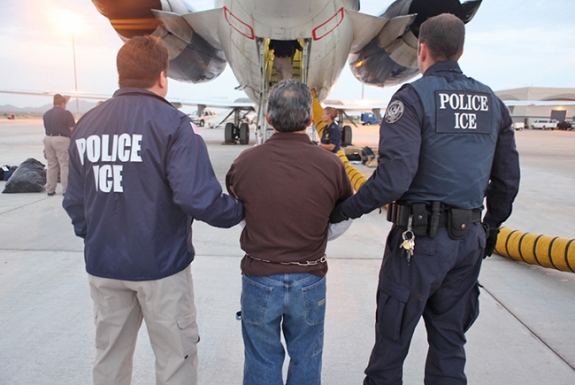 It was another record breaking year for deportations, with DHS logging 396,906 removals during Fiscal Year 2011. While the raw number is not in doubt, its meaning is far from clear. According to DHS, 55% of those removed (approximately 218,000) were “criminal aliens,” but the definition of “criminal” is overly broad. While DHS may tout this numbers as proof that it’s rooting out serious criminals only, it’s important to note that many of these “criminal” aliens have only minor convictions such as traffic offenses or entering the U.S. without a visa.

A similar challenge lies in analyzing the claim that 90.5% of those deported fall within ICE’s stated priorities, because immigrants with criminal convictions represent only one of those priorities. The others—recent border crossers and civil immigration violators (people who do not pose a threat and who have never been convicted of a crime)—represent the other two priority categories.

Understanding these distinctions helps in teasing out the more disturbing data buried within the criminal alien categories. According to DHS, 40% of criminal deportations were convicted under the four categories of homicide, sexual offenses, drug-related offenses, or driving under the influence (DUI). The other 60% of “convicted criminals” fall into other categories including immigration crimes and traffic crimes.

Because ICE categorizes criminal offenses so broadly, minor offenses can appear to be serious crimes. For example, drug-related crimes can include everything from dealing large amounts to simple possession; burglary can include a minor shoplifting offense. For a long time, immigrants who crossed the border illegally or re-entered the U.S. after being deported were simply deported; they were not prosecuted for a federal offense. However, prosecutions for illegal entry and reentry have increased dramatically in recent years (accounting for nearly half of all federal prosecutions filed). This means that the number of “criminal aliens” convicted of immigration offenses has increased as well.

While we don’t have the entire criminal conviction breakdown for FY2011, the FY2010 numbers are illustrative. In FY2010, the top three crime categories of “convicted criminal alien” deportations were 1) dangerous drugs, 2) immigration, 3) criminal traffic offenses. In fact, nearly 1/5 of all “criminal aliens” deported were convicted of immigration violations (predominantly illegal entry and reentry), and another 1/5 were convicted of traffic offenses, including driving without a license. It is likely that FY2011 numbers are similar.

These latest deportation statistics raise additional questions about how the administration is allocating its resources. States like Arizona and Alabama have passed laws that allow state and local police to arrest and convict immigrants for minor offenses and funnel them to ICE for deportation even though they pose no threat to the community. The 287(g) and Secure Communities programs similarly act to identify immigrants for deportation, regardless of the severity of their criminal history—or whether they have a criminal conviction at all.

Recent reports by the Transactional Records Access Clearinghouse (TRAC) show that the federal government is prosecuting more immigrants with illegal reentry, while prosecutions for other federal offenses, such as weapons-related offenses, have decreased. TRAC has also found that deportations of terrorists and threats to national security have actually decreased in recent years.

The real dilemma for DHS however, is how it plans to reconcile its criminal deportation statistics with its new initiatives on prosecutorial discretion. If the initiatives announced this summer are put in to place there should be at least a slight drop in deportations next year because some of these traffic offenders and other minor violators of the law may be able to establish that they merit deferred action or other grace. Moreover, if ICE declines to prosecute immigrants convicted under perverse state immigration laws, its numbers should decline even further.

DHS should be preparing people now for these changes. Rather than trumpet its record breaking number, DHS should attempt to explain just how it hopes to further refine its methods for catching those who truly pose a threat to our country and for exercising discretion towards those who do not. And Congress should remember that DHS is spending a significant chunk of its resources deporting traffic violators and other minor offenders and noncriminals—hardly a way to keep down expenses in an overstretched federal budget.