Heads Up, Virginia, Anti-Immigrant Agenda Could Be 2012 Legislative Focal Point 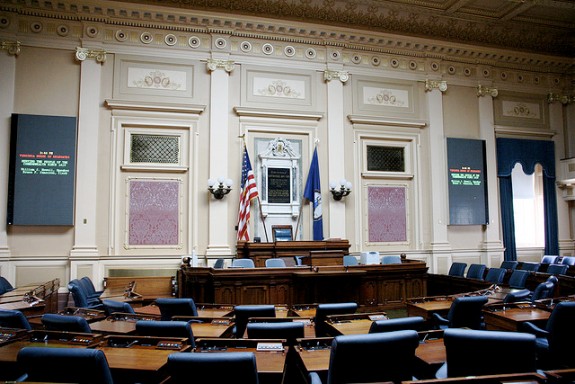 The Virginia General Assembly that convenes in January 2012 will be much changed from the one that it replaces.  Effective control of Virginia’s government—a Governor, House of Delegates and Senate— is now in the hands of legislators who have consistently sought to lead Virginia in the direction of states like Arizona and Alabama that boast of how inhospitable they are to undocumented immigrants. For example, one of the Governor’s first acts after his election in 2009 was to seek 287g authority for the State Police (a request that is still pending). And this fall’s legislative elections resulted in an increase in members of both the House and the Senate who ran on overtly anti-immigrant platforms. Delegate Jackson Miller (R-Manassas), one of the most anti-immigrant legislators, has just been elected as majority whip.

Virginia currently has nearly 50 laws applicable to aliens and immigrants, including requirements for police to check the immigration status of those arrested and taken into custody (2008), presumptions against bail for persons in the country without authority (2008), and legal presence requirements for driver’s licenses (2004) and state funded social services (2005).

The issue of when a police officer can check someone’s immigration status has been a hot topic in Virginia for years. In 2006, a Prince William County ordinance originally required that, like Alabama, police check the immigration status of any person lawfully stopped if they reasonably suspected the person was in the country without authority. State law in effect since 2008, requires that every person arrested and taken into custody have his or her status checked at the time they are booked. And last year, a bill (HB 2332) that would have required every law enforcement officer to inquire into the immigration status of every person summonsed or arrested passed the House of Delegates by a bi-partisan vote of 68-31, before dying in the Senate.

This coming session, the legislature is likely to consider again a number of bills killed in prior sessions, including some constitutionally suspect proposals now being tested in federal courts:

Even though many of these and other provisions of anti-immigration laws (like Alabama’s HB 56) have been enjoined by the courts, additional constitutionally questionable proposals may come up in Virginia for the first time in 2012. For example, Virginia may see proposals banning contracts between an undocumented immigrant and another person or declaring them unenforceable in state court, or proposals making it a felony for undocumented immigrants to enter into a “business transaction” with the Commonwealth. The Virginia legislature could try to make it a crime  to fail to complete or carry an alien registration card (a law that in Alabama recently resulted in the arrest of a German Mercedes Benz executive), or prohibit employers from taking state tax deductions for wages paid to undocumented workers.

The defeat of Arizona anti-immigrant mastermind Russell Pearce may be a sign that the electorate is fed up with expensive immigration control bills that hurt the economy and do nothing to solve the problem.  Let’s hope Virginia legislators get the message that extreme anti-immigrant legislation is not in anyone’s interest.