Supreme Court to Weigh in on Injunctions Against Arizona SB 1070 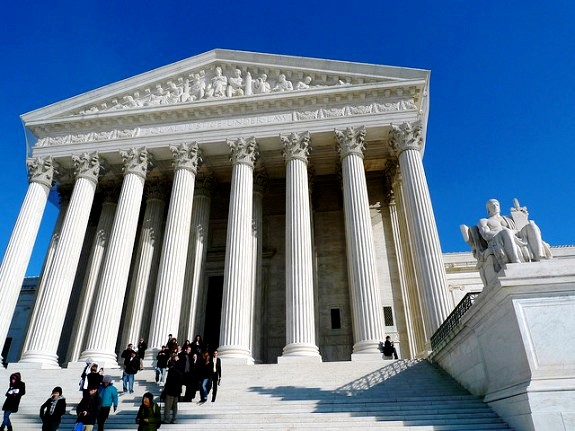 Earlier today, the Supreme Court announced what many supporters and opponents of Arizona SB 1070 long expected: that the Justices will themselves have the final word on the validity of the injunctions entered shortly after the law was enacted last year. Technically, the question before the Justices is simply whether four of the law’s provisions should be temporarily blocked pending resolution of a larger legal challenge. In addition, the Court will not consider claims raised in a separate lawsuit by numerous immigrants’ and civil rights groups. But in the decision it ultimately issues, the Supreme Court may well provide broad guidance about what role, if any, local police may play in enforcing federal immigration law—which could in turn affect legal challenges to copycat laws in other states, such as Alabama.

How did the case get to the Supreme Court?

Soon after Arizona Gov. Jan Brewer signed SB 1070 into law, the federal government filed suit alleging its provisions conflicted with, and were thus “preempted” by, federal immigration law. A district judge in Phoenix entered a temporary injunction against four of the law’s provisions while permitting others to go into effect. A federal appeals court in San Francisco then upheld the injunction, causing Arizona to file a petition with the Supreme Court.

Which provisions of SB 1070 will the Supreme Court consider?

The Justices will evaluate the temporary injunctions against the following four provisions of SB 1070:

The Justices could vote to uphold or overturn the injunction against all, none, or some of the provisions.

When will the case be argued and decided?

The Supreme Court did not set a date for oral argument, though it will likely occur in March or April 2012. Regardless of when the case is argued, the decision, as always, is likely to come by the end of June 2012.

Why did Justice Kagan recuse herself from the case?

The order announcing the Supreme Court’s acceptance of the case also stated that Justice Kagan recused herself from the matter. While no specific reason was given, it is fair to assume she took part in internal discussions about the suit—which was filed shortly after her nomination to the Supreme Court—during her previous stint as Solicitor General. To prevail, the United States will likely need votes not only from Justice Kennedy, who is often a “swing” vote in controversial cases, but from one of the other four Republican nominees (Chief Justice Roberts, or Justices Scalia, Thomas, or Alito).

If the Justices split 4-4, the ruling of the Ninth Circuit would automatically be upheld—but would not create “precedent” or otherwise be binding on lower courts. As a result, the status quo would stay in place unless and until the Justices considered a separate challenge. However, if Justice Kennedy and the Court’s remaining Democratic nominees were to rule against Arizona, it would strongly suggest the federal government would win a case argued before all nine Justices.

If Arizona wins, will states have a “green light” to enact copycat laws?

Certainly not. At present, the Supreme Court is only considering whether the four provisions of SB 1070 should be temporarily blocked while the underlying legal challenge is resolved. In addition, the suit brought by the federal government involves a much narrower set of issues than a companion case brought by a coalition of immigrants’ rights groups. Finally, even if the Supreme Court finds the injunctions were not required against the law as written, it would not prevent future suits from challenging how the law is actually implemented.