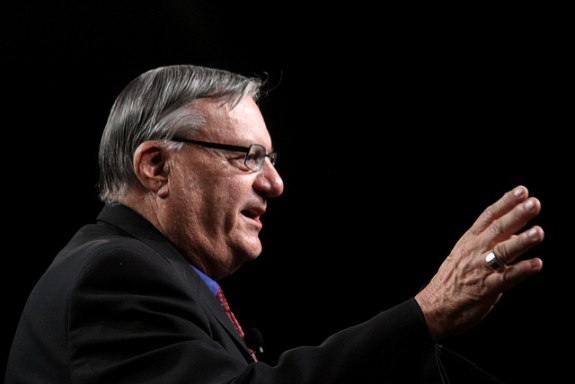 Today, the Secretary of the Department of Homeland Security (DHS), Janet Napolitano, announced that DHS will terminate its 287(g) agreement with the Maricopa County Sheriff’s Office and restrict access to the Secure Communities program, following damaging findings released by the Department of Justice (DOJ). After a three year long civil rights investigation into the Maricopa County Sheriff’s Office (MCSO)—an office led by America’s “toughest sheriff” Joe Arpaio—the DOJ announced today that it had “reasonable cause” to believe the Sheriff’s Office has “engaged in a pattern or practice of misconduct that violates the Constitution and federal law.”

In addition to the excessive use of force, the failure to investigate allegations of sexual assaults and practices that prevented the protection of Latino residents, the DOJ found reasonable cause to believe the Sheriff’s Office participated in:

As if that weren’t enough, the DOJ also found that the Sheriff’s Office failed to implement policies guiding policing practices, allowed the use of unconstitutional practices, provided inadequate training and supervision, and lacked sufficient oversight and accountability.

Maricopa County Sheriff Joe Arpaio is renowned for his “tough on immigration” media stunts, such as requiring detainees to wear pink underwear, segregating inmates, and marching shackled inmates to a tent city surrounded by an electric fence.

Following the investigation, the DOJ said that it will work with the Sheriff’s Office to develop and implement a comprehensive reform plan to address the violations and will even seek legal action if the office fails to cooperate. According to Assistant Attorney General for DOJ’s Civil Rights Division, Thomas E. Perez:

Effective policing and constitutional policing go hand in hand … MCSO’s systematic disregard for basic constitutional protections has created a wall of distrust between the sheriff’s office and large segments of the community, which dramatically compromises the ability to protect and serve the people … We hope to resolve the concerns outlined in our findings in a collaborative fashion, but we will not hesitate to take appropriate legal action if MCSO chooses a different course of action.”