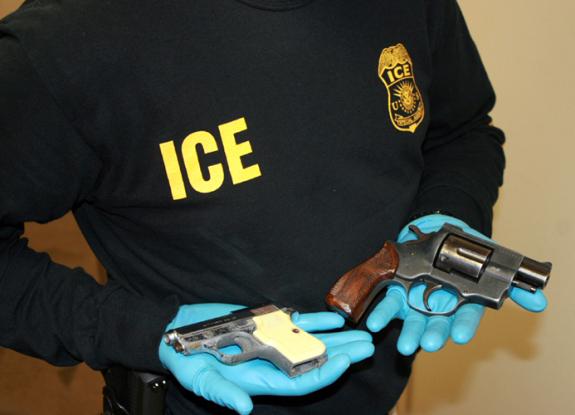 The federal government’s current approach to border security is dangerously misguided. Border-enforcement resources are directed at what gets smuggled across the border—people, drugs, guns, money—rather than who is doing the smuggling; namely, the transnational criminal organizations based in Mexico which are commonly referred to as the “cartels.” If the U.S. government wants to get serious about enhancing border security, it will begin to systematically dismantle the cartels rather than just seizing the unauthorized immigrants and the contraband they smuggle and arresting a few low-level cartel operatives in the process.

This is the central message of a new report by former Arizona Attorney General Terry Goddard, entitled How to Fix a Broken Border: Disrupting Smuggling at Its Source. The report starts off by noting that when it comes to border security, “the prevailing assumption is that all we need to stop illegal crossings of drugs, people, cash, and guns are more Border Patrol agents, more National Guard troops, and more surveillance and sensors to cover the hundreds of rugged miles between lawful ports of entry.” Indeed, this has been the rationale for building 650 miles of border fencing along the U.S.-Mexico border, and for the massive expansion of the Border Patrol since the early 1990s. The Border Patrol now numbers 21,000 agents and has a high-tech arsenal that includes unmanned aerial drones.

Yet, in spite of all the fencing, agents, and technology, cross-border smuggling continues unabated. The reason for this is twofold. First, the cartels that do the smuggling are, as Goddard puts it, “superbly organized, technologically adept, and very well funded.” When it comes to fencing in particular, they “have the capacity to go over, under, around, and even through virtually any physical barrier.” The U.S. Government Accountability Office (GAO) reports that “during fiscal year 2010, there were 4,037 documented and repaired breaches” of border fencing.

Second, the U.S. government is focused on seizing different kinds of contraband—and assigns different kinds to different government agencies: Immigration and Customs Enforcement (ICE) gets unauthorized immigrants, the Drug Enforcement Agency (DEA) gets illegal drugs, and Alcohol, Tobacco, and Firearms (ATF) gets illegal guns. Missing from this division of labor is a coordinated assault on the cartels that do the smuggling. This is a losing proposition. As Goddard emphasizes:

Going after the contraband product or smuggled people, as this country has been doing for years, is destined to be an endless chase. The cartels will just regroup and continue operations, learning from their mistakes. If we are serious about stopping the threat on the border, we have to dismantle the criminal organizations that carry the contraband and take away the tools that make them so effective.

What is needed, says Goddard, is a border-defense strategy that is “intelligence driven and multi-level.” It must target both the cartel leadership and the many subcontractors who work for them. And it must target cartel organization from every possible angle:

Whatever makes the cartel organizations strong must be attacked. Their communication systems must be cracked, jammed, and shut down. Their leaders must be identified, arrested, and incarcerated. Most important, the illegal flow of funds across the border into cartel pockets must be disrupted, interrupted, and stopped.

Goddard is incredulous that “this country has hardly lifted a finger to stop over $40 billion a year in cartel funds pouring across the border.” He calls for the Department of the Treasury to become “a full participant in the effort to stop the cartels by cutting off the illegal transfer of funds” that occurs through banks, wire-transfer companies, import-export businesses, and businesses that issue “stored value instruments.” As he points out, the “physical border is irrelevant to the flow of money; it is the virtual border in cyberspace and currency exchanges that must be defended.”

The current border-enforcement strategy is designed to fail. Goddard writes that “pouring even more money and manpower into enforcement on the border will have little impact as long as the criminal organizations remain intact.” He concludes that “only when the smuggling organizations are dismembered will border defense efforts be equal to the threat. Only then can it truthfully be said that the border is ‘secure.’”