In Fight Over SB 1070, Arizona Makes an All-Too-Familiar Case to the Supreme Court 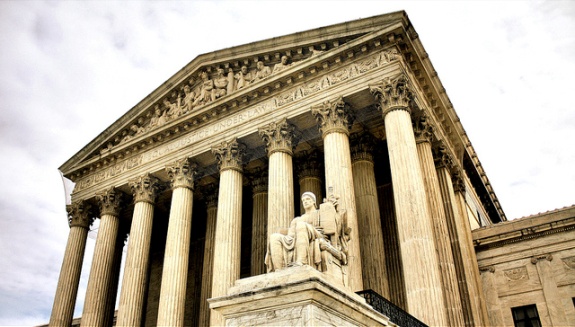 The Supreme Court case involving Arizona SB 1070 has officially entered the home stretch. On Friday, the Justices announced that oral arguments will take place on the fourth Wednesday in April, making it the final case to be heard this term. Yesterday, Arizona filed its much-anticipated brief at the Supreme Court, laying out its legal defense of the four provisions currently blocked by a preliminary injunction. To make its case to the Court, Arizona retained renowned attorney Paul Clement, a former Solicitor General who is simultaneously handling the legal challenge to the Affordable Care Act. But while the state may have brought in new lawyers, much of its brief reads like an all-too-familiar “study” from an anti-immigration organization.

Filings at the Supreme Court typically open with a straightforward overview of the issues involved. Arizona’s brief instead begins with hyperbolic claims regarding the “epidemic” of violence brought in by migration from Mexico—claims that, even if true, would be legally irrelevant. For example, the brief suggests that Arizona is awash in immigration-related crime, notwithstanding that crime rates were falling throughout the state even before passage of SB 1070. The brief also intimates that Mexican drug cartels pose a threat to American police, even though—as Arizona’s former Attorney General recently explained—cartel members purposely try to avoid violent confrontations with U.S. law enforcement officers. Perhaps not surprisingly, Arizona Governor Jan Brewer has used many of the same myths in defending the law.

More importantly, even if the brief’s factual claims were correct, they would be legally irrelevant. The question facing the Supreme Court is not whether states along the border may enact laws like SB 1070. The question is whether any state can enact such a law, including those largely unaffected by undocumented immigration (like Alaska and Hawaii). Strategically, it is difficult to see what purpose the discussion of Arizona-specific problems serves other than to vilify undocumented immigrants and create empathy for the people ostensibly affected by their presence in the state.

In addition to overstating the effects of undocumented immigration in Arizona, the brief conveniently overlooks the dramatic increase in deportations that has occurred under the Obama administration. Arizona repeatedly accuses the Administration of employing a “lax” enforcement policy, seemingly oblivious to the fact that nearly 1.2 million deportations have been carried out since the start of the Obama administration—a pace that, if continued for two full terms, would rival the total number of deportations during the Reagan, Clinton, and both Bush presidencies combined. But again, even if the current administration did employ a “lax” enforcement policy, it would have no relevance to the legality of SB 1070, which, as Arizona’s brief elsewhere concedes, depends on whether the enjoined provisions conflict with acts of Congress.

Finally, Arizona’s brief repeatedly contends that local police have “inherent authority” to investigate and arrest noncitizens simply for lacking valid immigration status. Though not mentioned by name in the brief, the concoctor of this idea is the infamous Kris Kobach—the law-professor-turned-Kansas-Secretary-of-State who authored both SB 1070 and other copycat laws. Kobach has peddled the “inherent authority” idea for years, in law review articles, testimony before Congress, and reports for restrictionist organizations like the Center for Immigration Studies. In addition to being overwhelmingly rejected by federal courts and prior presidential administrations, the “inherent authority” theory suffers from a more fundamental problem: if local police do not need federal authorization to carry out the same functions as federal immigration officers, Congress would have had no need to create the 287(g) program, which, as the Arizona’s brief elsewhere acknowledges, permits the federal government “to deputize state officials to enforce the immigration laws.”

Though Arizona’s brief makes many (familiar) mistakes, on one issue it is indisputably correct: our nation’s immigration system is “broken.” The fight over SB 1070 simply represents a disagreement over how to fix it. Those supporting Arizona believe the best solution is for each state to enact its own immigration law. Those opposing Arizona believe the best solution is for Congress to modernize a system that has not been comprehensively overhauled since the 1960s. Regardless of how the Supreme Court ultimately rules, our national immigration system will remain “broken” unless and until Congress passes comprehensive immigration reform.