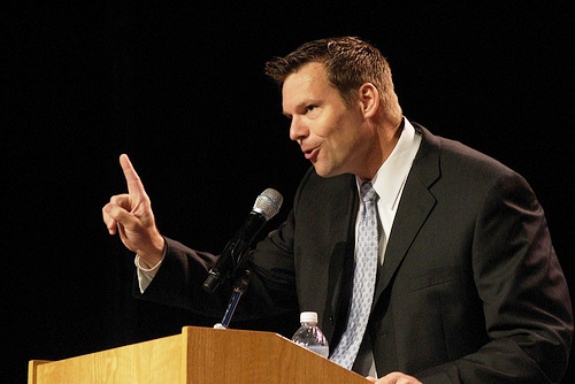 A recent Salon.com article quotes long-time immigration restrictionist Kris Kobach putting a figure on his self-deportation policy for the first time. “If we had a true nationwide policy of self-deportation,” Kobach said, “I believe we would see our illegal alien population cut in half at a minimum very quickly.” Salon.com did the math, finding that “with an estimated 11 million undocumented residents in the country, Kobach is hoping to force 5.5 million people to leave the country by 2016.” Kobach insists, however, that he does not want “to do it at gunpoint.” Instead, he said undocumented residents “should go home on their own volition, under their own will, pick their own day, get their things in order and leave. That’s a more humane way.”

Kobach’s self-deportation idea, however, is grounded in fantasy. In what version of reality would we see undocumented immigrants, two-thirds of whom have been putting down roots in the U.S. for a decade or longer, simply get up and leave?  It’s also hard to know what Kobach means by “humane.” What could be humane about compelling nearly three-quarters of the undocumented population who have U.S. citizen children to walk away from their kids?

Furthermore, it’s unclear how Kobach would take his method of “humane self-deportation” to the national level. Would he force all states to pass their own SB1070s or HB56s? The Supreme Court has already ruled that the federal government cannot force states to pass laws. Or would he advance more enforcement programs at the federal level, which so far have done nothing to deter unauthorized immigration, while costing the American taxpayers billions?

From a purely economic point of view, Kobach’s fantasy ignores the impact of losing millions of workers, consumers and taxpayers on the American economy. In Alabama, home to one of Kobach’s ongoing self-deportation experiments, reports estimate that losses could be in the billions because of Kobach’s law. And these estimates don’t include the legal costs the states bear to defend the laws.

The public should beware as Kobach’s self-deportation fantasy is not just his own but one he is sharing with GOP Presidential aspirant Mitt Romney, with whom Kobach boasts of being “in regular contact.” The public should also be aware of Kobach’s connections to extremist groups—connections Kobach downplayed in the Salon.com article—who have previously funded Kobach’s efforts and care little about having a constructive dialogue about smart and effective immigration policy.

No one knows what Kobach will say next or if “humanely” ejecting five and a half million people from the United States would be enough to satisfy him or those he works for. However, one can be certain that his dangerous self-deportation fantasy is not “humane” and is completely wrong for the nation.