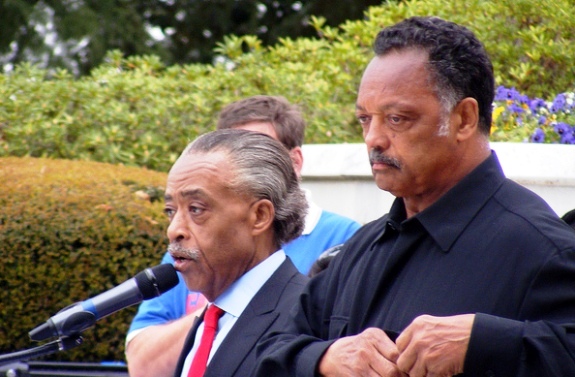 Late last week, thousands gathered on the steps of Alabama’s capitol building to hear civil rights leaders—Rev. Jesse Jackson, Rev. Al Sharpton, Martin Luther King III and Wade Henderson of the Leadership Conference on Civil and Human Rights, among others—speak out against the state’s extreme immigration law, HB 56. Although key provisions of Alabama’s law have been enjoined by federal courts, the law still requires police to verify the immigration status of anyone stopped or arrested whom they suspect is in the country without documents. The leaders, who were also protesting a new voter ID law, called HB 56 the “most vile” law in the country.

Wade Henderson of the Leadership Conference, who has long opposed Alabama’s new immigration law, made reference to Alabama’s darker days:

“The state of Alabama … is once again using fear and intimidation as weapons against those without power. This time, the targets are Latinos and the aim is to drive them from their homes and their communities,” Henderson said.

Religious, business and civil rights groups—including the NAACP—have continued to speak out against HB 56 since Governor Robert Bentley signed the law in June 2011. Bernard Simelton, Alabama NAACP president, called HB 56 “mean-spirited” and said that “we have to join forces and defeat it. We’re doing everything we can to get the law repealed—to demonstrate to our politicians that the law is unconstitutional.”

Civil and immigrant rights leaders, instead, are demanding a fair and comprehensive way forward for undocumented immigrants in America. At the rally, Rev. Jesse Jackson plugged the DREAM Act, legislation that would provide a path to citizenship for qualifying undocumented immigrant students who plan on going to college or joining the military.

“Democracy is a path to citizenship, not deportation,” Jackson said. “Democracy is the path of the DREAM Act, not the nightmare act of race-profiling, violence and family separation.”