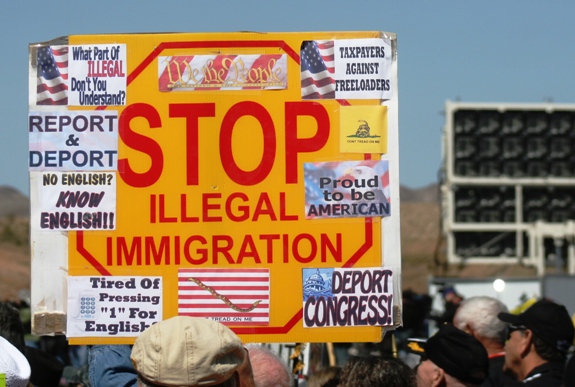 The “nativist extremist” movement in the United States is in the midst of a fundamental transformation. On the one hand, the number of these virulently anti-immigrant groups plummeted between 2010 and 2011. On the other hand, many of the people and ideas from these groups have found new homes in the conspiracy-obsessed “Patriot” movement, the Tea Party movement, and some factions of the Republican Party. In other words, the hateful agenda of the waning nativist-extremist movement is being mainstreamed.

This is the portrait that emerges from an analysis by the Southern Poverty Law Center (SPLC), which tracks all manner of hate groups in the United States. Heidi Beirich, director of SPLC’s Intelligence Project, writes in the Spring 2012 issue of the Intelligence Report that the number of nativist extremist groups fell from a high of 319 in 2010 to 184 in 2011—a decline of 42 percent. According to Beirich, the past year witnessed “much of the vigilante anti-immigration movement collapsing under the weight of bad press, organizational disarray, and the co-optation of the movement’s concerns by state legislatures passing draconian legislation targeting foreigners.”

Beirich notes that “most of the surviving groups are part of a single large coalition, the Federal Immigration Reform and Enforcement Coalition (FIRE),” and that “the most important Minuteman groups—the Minuteman Civil Defense Corps (MCDC) and the Minuteman Project (MMP)—have all but collapsed.” The implosion of the Minuteman groups in particular began “in 2009, when former Minuteman Shawna Forde and two accomplices murdered a Latino man and his 9-year-old daughter in Arivaca, Ariz.” The publicity surrounding the murders cast an unflattering light on the Minuteman movement which was not exactly helpful for recruiting and fundraising purposes.

The dimming fortunes of nativist extremist groups notwithstanding, it is too early to break out the champagne. As Beirich explains, “one important reason for the falloff in the nativist extremist groups is that their concerns have largely been adopted by more mainstream allies in the Tea Parties and the Republican Party.” This is evidenced by the proliferation of anti-immigrant legislation making its way through state legislatures in Arizona, Alabama, Georgia, South Carolina, and elsewhere. Much of this legislation has been crafted by a single group: the Immigration Reform Law Institute, which is the legal arm of the nativist Federation for American Immigration Reform (FAIR).

In short, as Beirich puts it, “most of the energy that once animated the anti-immigrant movement seems today to have moved into the political mainstream.” However, Beirich says that this does not necessarily mean the nativist extremist movement is winning. After all, the past year saw “the unprecedented recall of the most anti-immigrant politician of them all, Arizona’s former Senate leader, Russell Pearce.” And the devastating economic impact of Alabama’s anti-immigrant law has led some prominent Republicans in the state to call for its revision.

Which is to say that things may look grim, but there is still hope.