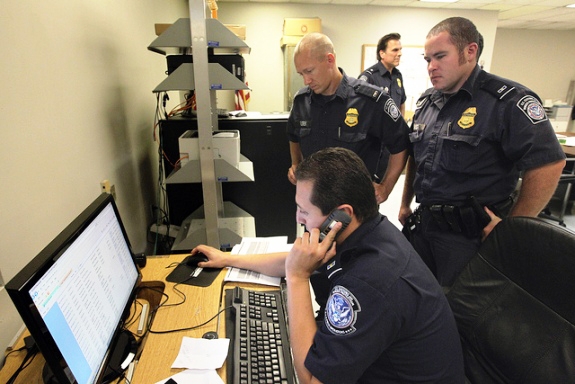 Nine years after its creation, the Department of Homeland Security (DHS) is still hampered by mission overlap and inadequate information sharing among the various agencies within the department. So concludes a recent report by the DHS Office of Inspector General, entitled Information Sharing on Foreign Nationals: Border Security. Highlights from the report include a recommendation to scrap the controversial NSEERS database, and a call for real department-wide coordination among DHS agencies.

The report “evaluated whether levels of cooperation, resources, and technology were adequate for department officers charged with border security.” For many officers, the answer was “no.” More precisely, “fragmented data systems and inadequate resources and infrastructure remain a challenge for many officers.” Moreover, relationships “among law enforcement components on the northern and southern borders struggle with mission overlap and inadequate information sharing.”

To a great extent, the problems related to information sharing within DHS are a product of how the department came into being. As the report notes:

“Most databases that DHS uses were developed before the Department was created. Each was designed to serve specific antiterrorism, law enforcement, immigration, and traveler screening missions for its creator. The databases are not integrated, and DHS components that screen and vet foreign nationals must check information in as many as 17 data systems.”

Some DHS “components,” or agencies, “have developed software to streamline and consolidate necessary information contained in these data systems.” For instance, Customs and Border Protection (CBP) officers who conduct immigration inspections at ports of entry have access to “software programs that consolidate information from various DHS, Department of State, and Department of Justice data systems.” However, comparable software is not available to Border Patrol agents conducting investigations or to U.S. Citizenship and Immigration Services (USCIS) asylum officers “who evaluate aliens in the credible fear and reasonable fear processes.”

The report finds that DHS could trim its stock of “fragmented data systems” by doing away with one in particular that is outdated and serves no useful function: the database tied to the infamous National Security Entry-Exit Registration System (NSEERS). NSEERS was implemented shortly after 9/11 and required the “special registration of certain categories of aliens from predominantly Arab and Muslim countries.” According to the report, “the database that supports this program is obsolete and should be terminated.”

Another systemic problem which afflicts DHS is mission overlap between various DHS agencies. For instance, the overlapping missions of Immigration and Customs Enforcement (ICE) Homeland Security Investigations and the U.S. Border Patrol “on the northern and southern border have been a source of concern since the establishment of DHS.” Moreover, both ICE Enforcement and Removal Operations and asylum officers “expressed frustration regarding the length of time required to process some detained asylum cases.” Often, “asylum officers noted that other DHS components may not correctly identify whether aliens belong in the asylum, withholding of removal, or Convention Against Torture caseloads.” And officers from other DHS agencies frequently fail to complete the necessary paperwork in such cases. The report recommends the establishment “of timeliness criteria for completing reasonable fear cases.”

In an effort to resolve DHS’s systemic shortcomings, from fragmented databases to mission overlap, the report calls for department-level oversight of all DHS components. Such coordination “could better prioritize how resources are allocated among components.” In addition, “direct DHS-level guidance and oversight is necessary to establish clear goals and priorities to facilitate cooperation and coordination” among DHS agencies.

In other words, the report calls for DHS to become a single department rather than a collection of disparate and sometimes competing agencies.