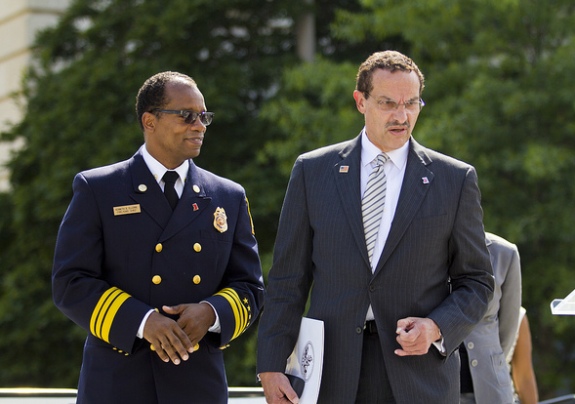 Today, ICE activated the Secure Communities program in Washington, DC, sparking fear in immigrant communities that the program will result in racial profiling and the deportation of non-priority immigrants as it has in other jurisdictions. With Secure Communities active, the fingerprints of all persons booked into DC jails will be sent to the FBI and will then be forwarded to DHS to be checked against federal immigration databases. If ICE decides to take action against an immigrant identified through the program, they  place a detainer on the individual—a request asking DC police to hold the person for up to 48 hours so ICE can take custody. However, in a move praised by immigration advocates, the DC Council passed an emergency act today limiting the District’s response to detainer requests.

DC is one of the last jurisdictions in the U.S. to be activated and one that attempted to opt out of the program when many believed that opting out was an option. ICE says that the program is mandatory and that jurisdictions may only choose to opt out of receiving information about the results of the fingerprint checks. However, while it is not the same as opting out, the DC Council passed today the Immigration Detainer Compliance Amendment Act, an act introduced by DC Council member Phil Mendelson which says the District will only comply with detainer requests for individuals who are over 18 and who have been convicted of a dangerous crime.

Created to identify serious criminals, Secure Communities has come under fire from immigrant advocates, elected officials, law enforcement officers, and others because it has resulted in the deportation of immigrants with no serious criminal histories. It also creates an opportunity for racial profiling and pretextual arrests in order to get suspected immigrants into the jail system to be checked against federal databases. Finally, law enforcement officials have warned that the program endangers trust between immigrants and the police, meaning immigrants will be less likely to cooperate with the police, making it more difficult for police to protect and serve their communities.

Despite the best intentions of the Mayor and the City Council, Secure Communities is now active in DC, and many of the problems experienced in other communities are likely to be encountered in the nation’s capitol as well. Restrictions on when and how DC law enforcement will honor immigration detainers should help to ameliorate some of the problems, but not all of them.

ICE has made some reforms to the program, but the agency continues to expand the problematic program before there is any assurance that reforms are having a positive effect. With nearly 100 percent of the country participating in Secure Communities, the number of immigrants, families, law enforcement agencies, and communities affected is huge and growing.