A Look Backward and Forward at Immigration Platforms 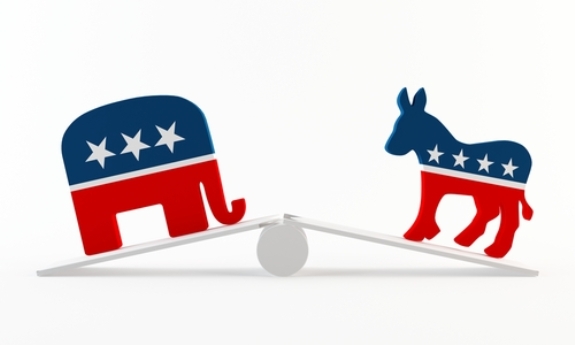 Eight years ago, the similarities between the Republican and Democratic platforms on the issue of immigration reform were striking.  The 2012 immigration planks for both parties are equally striking, but for the opposite reason.  Where 2004 demonstrated a unified vision of a broken system requiring reform, 2012 represents a virtual breakdown in agreement at least in official party documents, on how to go forward on immigration.  Comparing the evolution of the platforms from 2004 to 2008 to 2012 offers some insight into what has gone wrong in the immigration policy debate, and demonstrates why both sides need to come up with new, creative solutions to the continuing immigration policy crisis.

Virtually the only thing the platforms agreed upon in 2012 was the need to enhance America’s economic competitiveness by providing visas for highly skilled workers with advanced degrees in science, technology, engineering, and math (STEM). In fact, both platforms so strongly endorse this idea that it’s hard to believe Congress couldn’t find a way to make it happen in the last four years. But perhaps that isn’t so hard to understand when you realize how deep the divide is on so many other immigration issues. In 2012, the Democratic platform continues to call for comprehensive immigration reform and praises the President’s use of both prosecutorial discretion and deferred action, while the Republican immigration platform reflects the influence of Kris Kobach and other immigration restrictionists with its calls for “self-deportation,” an end to lawsuits challenging state immigration laws, and punishment for states that grant in-state tuition to undocumented students.

The punitive nature of the 2012 Republican platform is disappointing given the tremendous opportunity the Republicans had to propose new and innovative solutions and it’s a far cry from the 2004 platform. At that time, the GOP actually called for comprehensive reform, mirroring both President Bush’s State of the Union address and the McCain/Kennedy/Gutierrez/Flake bill that would be introduced the following year:

“The Republican Party supports reforming the immigration system to ensure that it is legal, safe, orderly and humane… America is a stronger and better nation because of the hard work and entrepreneurial spirit of immigrants, and the Republican Party honors them. A growing economy requires a growing number of workers, and President Bush has proposed a new temporary worker program that applies when no Americans can be found to fill the jobs. This new program would allow workers who currently hold jobs to come out of the shadows and to apply for citizenship in the same manner as those who apply from outside the United States.”

While the 2004 Democratic Party platform was a tad more explicit in laying out the requirements for legalization, its tone was almost identical:

“We will extend the promise of citizenship to those still struggling for freedom. Today’s immigration laws do not reflect our values or serve our security, and we will work for real reform. The solution is not to establish a massive new status of second-class workers; that betrays our values and hurts all working people. Undocumented immigrants within our borders who clear a background check, work hard and pay taxes should have a path to earn full participation in America. We will hasten family reunification for parents and children, husbands and wives, and offer more English-language and civic education classes so immigrants can assume all the rights and responsibilities of citizenship.”

By 2008, however, the party immigration planks reflected growing antagonism between the two parties on immigration.  For the Republicans, it was no longer acceptable to lead with the idea of a “legal, safe, orderly and humane” system. Instead, the 2008 platform reflected a hardening against legalization in favor of more enforcement:

“[The rule of law] means enforcing the law against those who overstay their visas, rather than letting millions flout the generosity that gave them temporary entry… It means requiring cooperation among federal, state and local law enforcement and real consequences, including the denial of federal funds, for self-described sanctuary cities, which stand in open defiance of the federal and state statutes that expressly prohibit such sanctuary policies, and which endanger the lives of U.S. citizens. It does not mean driver’s licenses for illegal aliens, nor does it mean that states should be allowed to flout the federal law barring them from giving in-state tuition rates to illegal aliens, nor does it mean that illegal aliens should receive social security benefits, or other public benefits, except as provided by federal law.”

And yet, despite this punitive approach, moderate voices ensured a general acknowledgement that, “Today’s immigrants are walking in the steps of most other Americans’ ancestors, seeking the American dream and contributing culturally and economically to our nation.”

In contrast, the 2008 Democratic platform fully endorsed comprehensive immigration reform, advocating for an expansion of legal immigration and legalization for the undocumented. In a preview of the Obama administration’s approach to enforcement, however, the Democrats also increased their security message while decrying the Bush administration’s reliance on mass worksite enforcement:

“We need to secure our borders, and support additional personnel, infrastructure, and technology on the border and at our ports of entry. We need additional Customs and Border Protection agents equipped with better technology and real-time intelligence… And we need to crack down on employers who hire undocumented immigrants. It’s a problem when we only enforce our laws against the immigrants themselves, with raids that are ineffective, tear apart families, and leave people detained without adequate access to counsel.”

The distinctions of 2008 pale, however, in contrast to the 2012 platforms, which seem to find few points of agreement other than STEM visas and praise for immigrants who serve in the military. The lack of agreement is less disturbing, however, than the degree to which we see very little in the way of new ideas.

This critique falls most heavily on the party that doesn’t hold the presidency right now. A sitting president is going to run on his record, and the party platform will reflect that, but the challenger has an opportunity to present a different vision and give at least some details of how to solve our immigration dilemmas.

Instead, while pledging to create a temporary worker program, the Republican platform fails to even acknowledge that the immigration system needs reform. Somehow, their platform assumes that simply enforcing laws more vigorously, and giving states more power to enforce immigration laws, ensures that all will be well.

Party platforms clearly don’t predict the future—if they did, comprehensive immigration reform would have been enacted in 2006 or 2007.  But they do set the tone for what is to come—or perhaps more accurately, they look forward and backward simultaneously.  Both platforms in 2012 offer up immigration positions that have been attractive to their base in the past, hoping that this will be enough to appease different constituencies and betting that undecided voters won’t be scared off if they stick to the script. Given how far apart the current scripts are, however, we can only hope the platforms don’t necessarily predict what’s to come in 2013.