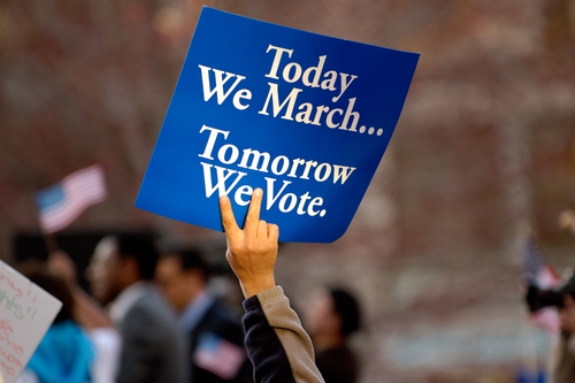 The nativist Center for Immigration Studies (CIS) has an implicit message for the Republican Party heading into the 2012 elections: stop worrying about Latino voters and just play to your predominantly Anglo base. Such is the kamikaze message contained within a new CIS report, innocuously titled Projecting the 2012 Hispanic Vote. The report dismisses the claims of innumerable analysts that Latino voters could tip the electoral balance one way or the other in the so-called “battleground” states and, by extension, in the nation as a whole. After all, argues CIS, veterans and senior citizens outnumber Latinos in the national electorate, so why not focus on winning them over instead? This may seem comical to some observers, but CIS is saying it with a straight face.

The CIS argument is simple—or perhaps simplistic is a more accurate characterization. According to CIS, there really aren’t that many Latino voters in the first place. In fact, they comprise just 8.9% of the national electorate, whereas non-Latino whites are 73.4% and non-Latino blacks are 12.2%. Since non-Latino whites outnumber Latinos by such a wide margin, says the report, “if a candidate increased his share of the Hispanic vote by 5 percentage points, but in doing so lost 0.7 percentage points of the white vote, the candidate would be worse off.” In other words, racial might makes right.

The report also observes that Latinos comprise an even smaller share of voters in most of the political battleground states than they do nationally. Specifically, “in 12 of the 18 states, Hispanics are projected to be less than 4 percent of the electorate (Virginia, Iowa, New Hampshire, Ohio, Pennsylvania, North Carolina, Wisconsin, Michigan, Indiana, Minnesota, Missouri, and Maine).” CIS would not have us dwell on the grudgingly acknowledged fact that “in four of the states (New Mexico, Florida, Nevada, and Arizona), Hispanics will be more than 16 percent of the vote.” More importantly, the report neglects to mention just how close the 2008 presidential election was in some of these states. For instance, John McCain won Missouri by only 3,903 votes. A few voters can make a very big difference in a tight race.

The report does allude to this inconvenient reality in observing that the “Hispanic share of the vote nationally and in battleground states may seem small, but the upcoming election is almost certainly going to be close and even small changes in support may determine the winner of a particular state.” However, the report immediately dismisses Latino voters by stating that “this logic applies to other voting blocs as well.” For instance, the “8.9 percent Hispanic share of voters compares to veterans (12 percent of the electorate), those with family incomes above $100,000 (18 percent), seniors 65 and older (19 percent), married persons (60 percent), and those who live in owner-occupied housing (80 percent).”

This is a complete non sequitur. The number of voters who live in owner-occupied housing has no bearing on whether or not the Latino vote might prove pivotal in a particular election. Moreover, “Latino” is an ethnic identity which implies a set of social relations and an historical heritage far different from that which binds together the ranks of people who own their own homes. It is disingenuous to think that home ownership influences political behavior in the same ways as ethnic identity. Yet CIS would have us believe that homeowners experience the same kinds of connections with other homeowners that Latinos experience with other Latinos.

The CIS report concludes that “ethnicity is one of many factors that may impact the outcome of the 2012 presidential election. And it is not at all clear that ethnicity is the most important.” Apparently, CIS believes that if you just ignore the Latino vote, it will go away.