Understanding the Important Symbolism of the Maryland DREAM Act Victory 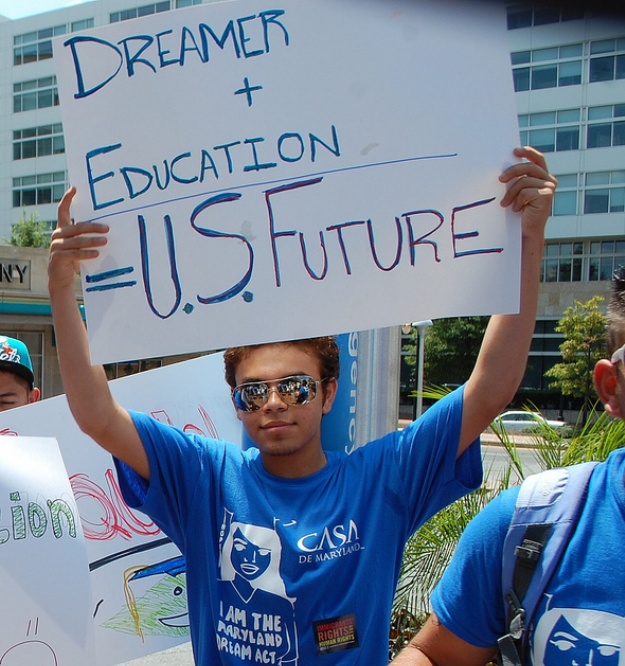 While much of last week’s energy was focused on Latino voter turnout in the Presidential race— and the subsequent recognition that immigration reform was all but inevitable—there was another major victory for immigration policy that came out of Maryland. Voters in the state supported through referendum their legislature’s decision to provide in-state tuition to undocumented students. This was the first vote of its kind in the nation and one where African-American voters were an important voting bloc in support of the measure.

Question 4 (or as advocates call it, the “Maryland Dream Act”)  asked Marylanders to decide whether or not the state should offer in-state tuition to undocumented students who want to attend college. Maryland is the first state in the nation to take the question of educating undocumented students to the voters.

In March of 2011, the Maryland state legislature passed a law that would allow young, undocumented students who graduate from the state’s high schools and whose parents pay state taxes, to attend state colleges and pay the standard in-state tuition that any other student in the state pays. In many other states that haven’t passed similar laws, undocumented students pay international student rates—even if they’ve grown up and gone to school in the state. This can be two or three times the normal rate.

Groups opposed to the in-state tuition measure passed by the legislature in 2011 pushed the law to a referendum vote, assuming they could defeat it by a popular vote. They couldn’t have been more wrong. In fact, 58% of voters in the state supported giving these students a chance to continue their education.  Maryland now joins more than a dozen other states that provide in-state tuition, but it is the first to decide to do so via the ballot box.

Also, while it’s likely Latino voters in the state came out strongly in favor of the referendum; Casa De Maryland points out that African-American voters also likely provided a critical push to approval of the referendum:

“Based on data gathered from the Maryland State Board of Elections, we know that the top 3 locations in the state with the highest percentage of the electorate who voted in favor of the Maryland DREAM Act were Prince George’s County with 74.8%, Baltimore City with 70.35% and Montgomery County with 72%. Both Prince George’s County and Baltimore City represent the locations with the highest concentrations of African-American residents in Maryland.”

This voting data was in addition to recognition of the African American leaders who came out in support of the bill including Baltimore City’s Mayor, Prince George’s County Executive, Maryland’s Lt. Governor, Maryland NAACP’s President, Montgomery County’s Executive, the Chair of the Legislative Black Caucus of Maryland and many more.

What the Maryland DREAM Act victory shows us is that given the choice, voters will support educating kids, regardless of their immigration status, that African-Americans understand that education is an important civil right, and that, when the decision is left to the American public, they will choose to help their hard-working neighbors move on and up to greater heights.

Maryland’s Attorney General Douglas Gansler also summed up the logic of the Maryland DREAM Act in the Baltimore Sun:

“By rewarding Maryland students for what they’re achieving, not for where they were born, the Act ensures a good return on our investment in Maryland children and equips them to compete in today’s economy.”