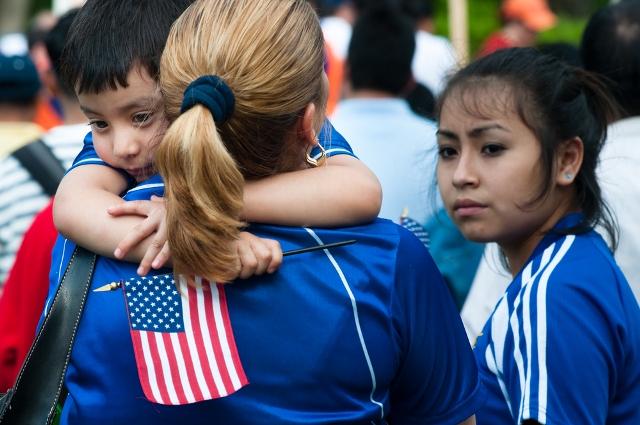 Some families facing long separations from their loved ones because of U.S. immigration laws will have an easier time of it in 2013. Thanks to a new regulation from the Department of Homeland Security (DHS), immediate relatives of U.S. citizens will be able to complete part of the processing of their immigration cases without leaving the country. The “Provisional Unlawful Presence Waiver of Inadmissibility for Certain Immediate Relatives” rule, often referred to as the new family unity rule, will be published tomorrow (January 3, 2013) and become effective on March 4.

DHS first proposed the change in procedure, which allows immediate relatives (parents, spouses, and children) of U.S. citizens who entered the country without permission to apply for a waiver of their unlawful entry while still in the United States, in April of 2012. The change in procedure was proposed as a solution to a growing problem—families were facing months, and in some cases, years of separation because of two conflicting provisions of U.S. immigration law.

Under the Immigration and Nationality Act (INA), a person seeking to adjust their status to lawful permanent resident must be admitted or paroled into the country if they wish to have their case decided in the U.S.  If they entered the country unlawfully, the law requires them to go to a U.S. embassy or consulate for processing of their application. Departure from the United States in many cases, however, triggers a three to ten year bar to re-entering the country, which requires a separate waiver application. Under past practice, an individual applied for the waiver after having been found inadmissible by a consular official and then had to apply to U.S. Citizenship and Immigration Services (USCIS) for a waiver.  The process was generally time consuming, inefficient, and often costly, particularly because it lengthened the amount of time families were apart.

For immediate relatives, at least, the new rule will streamline the process because they will not have to depart the U.S. until they have received notification that their waiver application has been “provisionally” approved, which means that they will be able to complete their visa processing in one step rather than two or three at the embassy.  Other applicants will continue to follow the standard process, including immediate relatives who may need other waivers for final approval of their Lawful Permanent Resident (LPR) status.

For the most part, the key provisions of the final rule remain unchanged from the proposed rule, despite pleas from many commenters to allow more people to take advantage of the new process and to clarify the rules for one of the waiver provisions (regarding proving extreme hardship to a U.S. citizen). DHS argued instead that it intends to take an incremental approach, beginning with a clearly recognizable group—immediate relatives of U.S. citizens—who are not subject to any visa limits under current law. Only after DHS assesses the effectiveness of the program for this group will it consider expanding to other groups, such as immediate relatives of LPRs or to any relative of a U.S. citizen, such as sons and daughters over the age of 21, who are eligible for a visa but are not classified as an immediate relative.

With respect to extreme hardship, which must be proved in order to obtain the waiver, DHS declined to create any regulatory criteria, arguing instead that extreme hardship is based on a totality of the circumstances that can’t be reduced to a single list of factors.

The final rule itself is quite short, but the accompanying summary and response to comments goes on for more than one hundred pages, and offers far more detail and analysis than is often seen in DHS regulations. This is a positive point, as it suggests that the regulators took public comments seriously, including concerns that the cost of the program would be overwhelming. There are detailed cost analyses, as well as projections of how many applications might be filed under the program, all of which will be useful to researchers and others studying the impact of the process.

Unfortunately, many people will still be disappointed, as the final rule doesn’t expand the categories of eligibility, at least for the time being. This is the balancing act, however, that we will continue to see throughout 2013, as the President and Congress wrestle with immigration reform legislation. Finding the sweet spot between expansive eligibility and administrative efficiency is never easy and ultimately leaves some people out in the cold. The challenge will be to continue to press for maximum coverage in all aspects of immigration reform as legislators have far more leeway than regulators to revise the immigration laws.