Business and Religious Leaders Come Together to Champion Immigration Reform 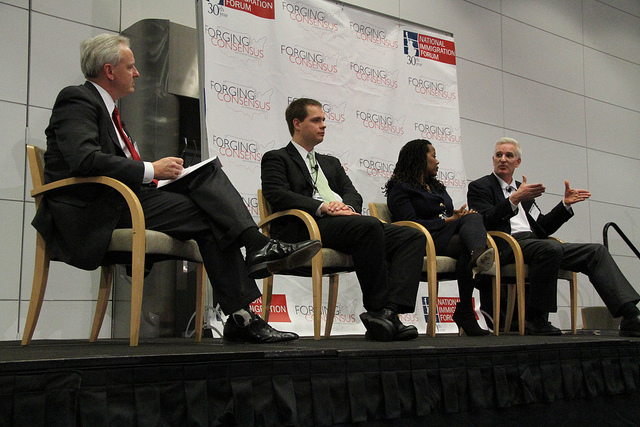 Immigration reform is an undertaking of such importance that it should transcend partisanship. That was the fundamental message of the business and religious leaders who gathered together yesterday at a press conference organized by the National Immigration Forum. The press conference was part of a campaign called Forging a New Consensus on Immigrants and America, which describes itself as “a growing and diverse constituency of conservative, moderate and progressive leaders that is determined to go beyond the rhetoric and find common ground for practical solutions.” The event comes on the heels of an announcement late last week by Thomas Donohue, President of the U.S. Chamber of Commerce, that a broad coalition of business, labor, religious, law enforcement, and ethnic organizations has coalesced around the cause of immigration reform.

For all of their ideological differences, the speakers agreed on a few key points:

However, the speakers did not agree on everything. For instance, there was good-natured disagreement as to the preferable legislative strategy for achieving immigration reform. Donohue argued in favor of a single, comprehensive bill that included all the necessary elements of systemic reform. But Gutierrez said that “four or five” separate, piecemeal bills covering different aspects of immigration reform might be more palatable to some lawmakers. In the end, they agreed that legislation should move in whatever form is most likely to succeed.

Regardless of differences such as these, the press conference illustrated that immigration reform is an issue which encompasses a wide range of interest groups and political persuasions. Perhaps more importantly, the pro-reform coalition now taking shape is, as Noorani emphasized, “strategic, disciplined, and unified”—which is just what is needed to get immigration reform legislation through Congress and onto the President’s desk.