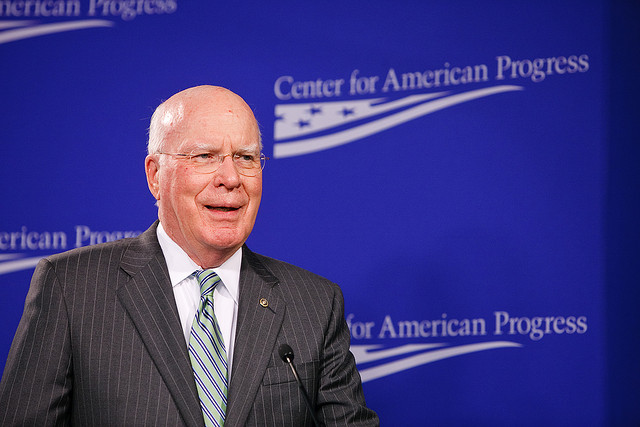 Senate Judiciary Chairman Patrick Leahy (D-VT) promised that the Violence Against Women Act (VAWA) would be the first bill he pushed in the 113th Congress after the House failed to vote on a version of VAWA that the Senate passed last year. The Senate version expanded protections for immigrant, LGBT, and Native American victims, which House Republicans opposed. Instead, the House passed a bill that failed to expand important protections and even rolled back protections for immigrants that have existed for decades. Ultimately, Congress failed to reauthorize the law, making it the first time since VAWA went into effect in 1994 that the measure to protect domestic violence victims had been allowed to expire.Now, with a filibuster-proof 62 cosponsors, the Senate likely will pass Leahy’s re-introduced version of VAWA later today. The measure expands coverage to undocumented immigrant crime victims, and Leahy added an amendment to increase resources to combat human trafficking.

Senator Leahy made a strategic decision to take out a provision included in last year’s bill that would have expanded the number of U visas available to immigrant domestic violence victims who assist or are willing to help in the investigation or prosecution of a criminal offense. Currently, there are up to 10,000 U visas available each year for primary applicants, and spouses and unmarried children of U-visa applicants may also be included.  Advocates for women’s and immigrant groups had pressed hard for an increase in the number of U visas, but this measure faced opposition in the House  in 2012 for something known as a “blue slip” problem . The problem refers to an obscure practice that lets the House kill a bill that originates in the Senate if it raises revenue. Leahy told reporters in January that cutting the U visa increase eliminated the revenue issue as a potential obstacle in the House. “So if [the U visa piece] is not there, let’s pass all the rest of it. If I can get 90 to 95 percent of what I want, I’ll take that and then fight for the other 5 percent.” He has vowed to include additional U visas in the immigration reform bill, which will also go through the Senate Judiciary Committee.

Ahead of this week’s Senate vote, it is promising that senators soundly rejected an alternative to the expanded Violence Against Women Act introduced by Sen. Chuck Grassley (R-IA). His version, which failed by a 34-65 vote last Thursday, would have placed new restrictions on U visas as well as shifting the bill’s focus away from women by removing the word “women” from the law’s largest grant program. Grassley had succeeded in getting some of these measures on last year’s Senate bill, so the rejection of his proposal this time around signals a greater understanding of the importance of moving VAWA forward to serve all victims of violence, regardless of where they were born.

Update:  The Senate passed the Violence Against Women Act on Tuesday, February 12, by a vote of 78-22.

Photo Courtesy of the Center for American Progress