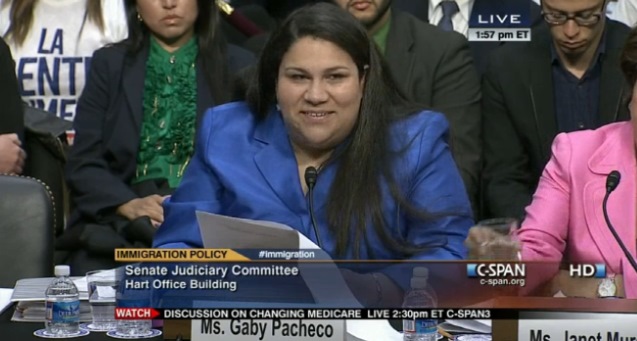 For more than seven hours on Monday, the Senate Judiciary Committee listened to testimony from almost two dozen people about the immigration reform bill a bipartisan group of senators introduced last week. From visas for farm workers and other foreign workers to the mandatory E-Verify system included in the bill, senators debated and questioned the witnesses about all aspects of immigration reform.

One point that was clear after the hearing is that immigration reform is more than creating a path to citizenship for undocumented immigrants already living in the U.S. It is about addressing the connected needs of families who want to be together, employers who need to hire foreign workers, and officials who are strengthening immigration enforcement. As Gaby Pacheco, a leader in the DREAM movement who came to the U.S. from Ecuador when she was 8, told the senators, “doing nothing” on immigration reform is no longer an option. “America’s history shows that we have been here before, and we have overcome,” she said.

Immigration reform that creates a system for immigrants who want to work in the U.S. and employers who need to hire foreign workers would also be an economic boon. During Monday’s hearing, anti-tax advocate Grover Norquist referred to it as “real stimulus” for the nation’s economy.  The bill sets up a system for agriculture workers on which both the farm workers union and employers agree. “There’s no question it’s the right balance,” said Charles Conner, president of the National Council of Farm Cooperatives. Brad Smith, Microsoft general counsel, said the bill increases the number of visas available for high-skilled workers who  are necessary to sustaining American business. Smith told the committee that U.S. colleges and universities are not graduating enough students with computer science degrees to meet the demand. “That is why high-skilled immigration in this legislation is of such great importance,” Smith said.

Of course, the bill is not perfect. Former Rep. Jim Kolbe (R-AZ) told committee members that it is still incomplete because it does not  include protections for LGBT families. “Families like mine are left behind as part of this proposal,” he said. “Equally important, U.S. businesses and our economy suffer because of the omission of lesbian, gay, bisexual and transgender families from the bill introduced last week.” Some senators said they will support an amendment to allow LGBT citizens to sponsor their immigrant partners.

During the hearing, senators also raised concerns about the strength of the border security provisions. Sen. John Cornyn (R-TX) said he thinks the bill would end up undermining immigration enforcement efforts by focusing on certain high-priority sections of the border and that it does not improve the country’s entry-exit system to track immigrants who overstay their visas. “This is perhaps one of the most concerning areas of the bill,” he said. “Unfortunately, while the entry system works well, the exit system is non-functional.” And Sen. Mike Lee (R-UT) said he was concerned about the discretion given to the homeland security secretary to determine the border security benchmarks.

Instead of tackling a comprehensive immigration reform measure, Sen. Ted Cruz (R-TX) questioned  whether the Senate should consider piecemeal bills instead so that they can focus on the sections “where there is wide bipartisan agreement.” He claimed that the path to citizenship for undocumented immigrants, which requires a decade-long wait in addition to paying fees and back taxes, is a divisive issue, even though American voters widely support it. “In my view, any bill that insists upon that jeopardizes the likelihood of passing any immigration reform bill,” he said.

But Cruz’s idea to take up immigration reform bit by bit misses the point that the  multiple issues within immigration reform are intertwined. There are already 11 million undocumented immigrants living here and contributing to the U.S. economy, and as Monday’s hearing further reinforced, Congress’s ability to fix our nation’s broken immigration system will have enormous repercussions on our nation’s future.