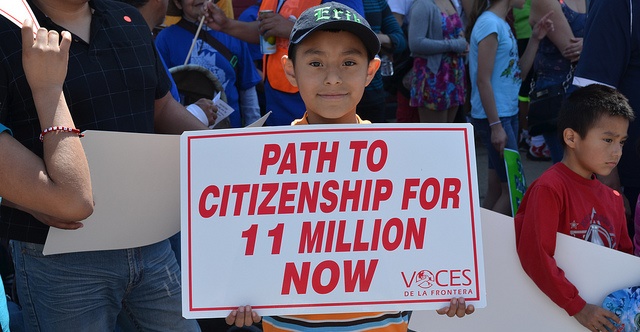 Tens of thousands of people across the country—from New York to Vermont to California and Arizona—gathered at rallies and marches yesterday to demand immigration reform. Immigrants and advocates joined with labor groups, lawmakers, and other organizations for the May Day, also known as International Worker’s Day, demonstrations in dozens of cities. And their message was clear: Congress must pass immigration reform.Sen. Dick Durbin (D-IL), a member of the Senate’s bipartisan Gang of Eight, spoke to the massive crowd in Chicago’s Federal Plaza, telling them to keep pushing for immigration reform. “We have the best chance we have had in 25 years to pass comprehensive immigration reform this year in Washington, D.C.,” he said “We have to seize that opportunity.” Before rallying in the plaza, thousands had marched through downtown Chicago chanting, “Now is the time!”

Jesus Tapia, a lance corporal in the military, whose parents are undocumented immigrants, also attended the rally and told the Chicago Tribune: “If I’m serving in the military, I think my parents should deserve a chance to stay.”

Rallies and public gatherings bring to light the voices of the individuals, which are often lost in the policy debates in Washington. Immigration reform is ultimately about people and each one has an individual story to tell.

The New York Times highlighted Tomás Rodríguez who has lived and worked in Arizona for twenty years without legal status and attended a rally there with his 17-year-old U.S. Citizen daughter.  “I want to be a citizen,” he said. “This is now my country. I’ve spent 20 years building for Americans. I want people to understand what I’m doing.”

Hundreds also joined a rally in Milwaukee, Wisconsin to voice their support. “This year there’s the opportunity to impact the decision, so it’s a very important year,” said Angelina Cruz, 33, an elementary school teacher in Racine. “I’m hopeful that there’s more progress and that we can put on the pressure,” said the granddaughter of migrant workers who settled in Wisconsin.

Protestors also marched through San Francisco’s Mission District to call for immigration reform. Emmanuel Valenciano, a 24-year-old undocumented immigrant, told a local TV news station that he is urging others to mobilize and joined the march to show how undocumented immigrants struggle without being able to work legally in the U.S. “We need a solution,” Valenciano said. Others in San Francisco said they were concerned about same-sex families being excluded from the Senate’s immigration reform bill. “We are sending a message to Congress that they need to support our inclusion,” said Amos Lim, who came to the U.S. in 1999 from Singapore to be with his now-husband, a U.S. citizen.

There is no doubt that the strength of the immigration rights movements lies in the individuals who carry the message of a more inclusive America, that treats everyone willing to come here and contribute with dignity and respect.  And there is nothing more civic and American than peaceful public protests.  Yesterday’s rallies and marches reflected both a growing movement in support of reform and the power of the public to demand that change.