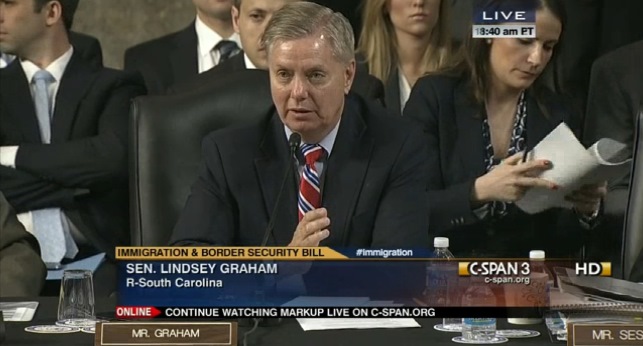 For the third day of the Senate Judiciary Committee’s mark-up of the “Border Security, Economic Opportunity, and Immigration Modernization Act,” committee members continued to work through Title Four (specifically regarding the W visa program) and began debating Title Three (about interior enforcement). The senators considered 21 amendments and passed 11 of them with mostly bipartisan support. Four amendments were withdrawn. The adopted changes included Sen. Chuck Grassley’s (R-IA) amendment to protect children’s social security numbers from identity theft and Sen. Sheldon Whitehouse’s (D-RI) proposal to help immigrant entrepreneurs. And they approved multiple changes to the E-Verify language in the Senate immigration bill to both strengthen the program and help small businesses comply with the new regulations.

Here are the amendments the Senate committee approved on Thursday:

Senate Judiciary Committee members will pick up with the remaining Title Three amendments as well as some remaining amendments about H-1B visas starting on Monday. And still to come is debate about amendments to Title Two, which includes legalization for undocumented immigrants currently living in the United States. Committee Chairman Patrick Leahy (D-VT) said at the end of Thursday’s hearing that the committee will continue the mark-up through next week.