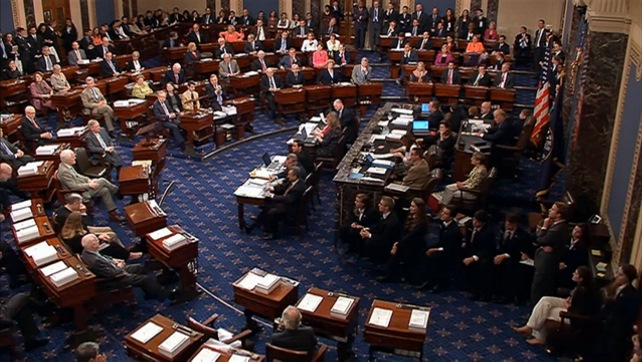 The Senate approved a massive overhaul of the nation’s immigration policies today in a historic vote. They voted 68-32 to approve S. 744, the Gang of Eight’s immigration reform measure that the Senate Judiciary Committee passed in May. Immediately after the vote, Sen. Dick Durbin (D-IL), a member of the Gang of Eight and sponsor of the DREAM Act, tweeted, “Today, we have accomplished something great, made America a stronger nation & honored our heritage as a nation of immigrants.” Before they cast those votes, Senate Majority Leader Harry Reid reminded senators of the human side of immigration. “We’re here to talk about people, not pages of legislation,” he said.The legislation sets up an earned path to citizenship for the 11 million undocumented immigrants, expands the employment visas available for those who want to work in the U.S., and includes due process protections for those in deportation proceedings. Additionally, after senators voted 69-29 to approve the Corker-Hoeven border security amendment yesterday, the bill has an enormous border enforcement expansion. While the border surge may not be good public policy, the amendment package reached critical compromises on issues that threatened the legalization program and the future of other immigrant visas.

Before the final vote, some senators expressed frustration about the lack of amendments to the bill. On Wednesday, Senate Majority Leader Harry Reid (D-NV) said the amendments could not move forward unless all senators agree. “My concern is the folks who wrote me a letter saying we need more amendments are the same people that stopped us from having amendments the first couple of weeks of this legislation,” he said. Before the Senate voted to end debate on S. 744, Sen. Patrick Leahy (D-VT) offered a package of noncontroversial amendments for the senators to vote on, but Sen. John Cornyn (R-TX) objected to the motion and stopped the vote.

Now it is up to the House to make the next move on improving the United States’ immigration process. House Speaker John Boehner (R-OH) told House Republicans again on Wednesday that he will not bring up S. 744 for a vote in the House. “We’ll do our own bill, through regular order and it’ll be a bill that reflects the will of our majority and the people we represent,” Boehner reportedly told them. The House Judiciary Committee is currently considering smaller, piecemeal bills that do not include legalization. Meanwhile, a group in the House continues to work on a comprehensive immigration bill. Rep. Luis Gutierrez (D-IL) told reporters today that they have drafted a bill and are reviewing it now.

While the measure is the result of compromise and is far from perfect, the Senate has passed a strong bill that fixes flaws in the U.S. immigration system while providing aspiring citizens a roadmap to earned citizenship.  It is time for the House to also move forward.