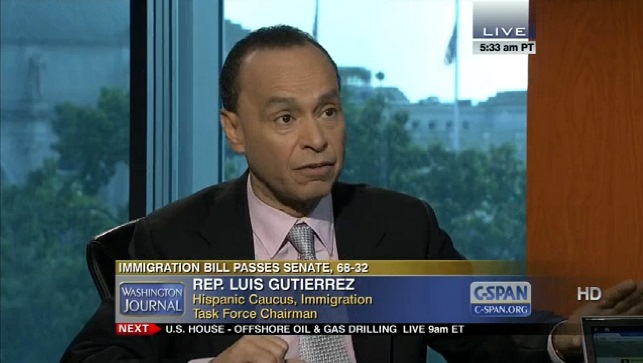 Now that the Senate has passed a sweeping measure to improve U.S. immigration policies, the attention turns to the House of Representatives, where it is unclear exactly when or how they will take up an immigration bill. The Associated Press reported that President Obama called House Speaker John Boehner (R-OH) and House Minority Leader Nancy Pelosi (D-CA) after the Senate vote to urge them to have the House act on an immigration bill. Earlier this week, Boehner said the House would not take up S. 744 and would do its own bill instead. If the House passed a separate immigration measure, then a conference committee with members from both chambers would meet to reconcile the differences.

As the Washington Post’s Dylan Matthews explains, there are three ways the House could take up a piece of legislation to overhaul the nation’s immigration laws. The first option would be a bipartisan, comprehensive immigration bill that a group of House members has been working on. Democratic Rep. Luis Gutierrez (IL) has said they have drafted a bill and are reviewing it.  He and Rep. Zoe Lofgren (D-CA), who are part of that Gang of Seven working on that bill, sounded hopeful about it on a panel at a conference on Saturday.  Another Gang of Seven member, Rep. Mario Diaz-Balart (R-FL), is also optimistic about the comprehensive bill passing the House, even under the so-called “Hastert Rule,” that Boehner said he will apply to any immigration measure.  The “Hastert Rule” would require that a majority of Republicans approve of the bill in order for it to come to the floor.

The second option would be for the House to consider a series of piecemeal immigration bills. The House Judiciary Committee has held a series of mark-ups on smaller bills, including the SKILLS Act to increase the number of high-skilled visas, an E-Verify measure that would rapidly expand the program, and a bill that imposes additional criminal penalties, border security, and detention and deportation. Lofgren described these as “bizarre bills.” If the House passed a package of separate immigration bills, it could consider those in a conference committee with the Senate bill. But the pieces of House legislation do not include a road to citizenship for immigrants already living in the U.S. Before the committee approved the E-Verify bill yesterday, Rep. Raul Labrador (R-ID) voiced concerns. He said he would vote for the bill, “but I do wholeheartedly believe that the only way E-Verify is going to be sufficient … is if we actually find a way to figure out what to do with the 11 million people that are here.”

The last—and rarest—option would be a discharge petition. This happens if 218 House members sign a petition to “bring a bill to the floor without a committee vote or the cooperation of the House leadership.” As Matthews explains, “There are 201 Democrats in the House, so they’d need 17 Republicans, not to mention a unified caucus, to succeed.”

No matter which option House members use, pressure is building for the House to do something to help fix the United States’ broken immigration system now that the Senate has passed a strong bill. Sen. John McCain (R-AZ), speaking to House members after the Senate vote, said, “You may have different views on different aspects of this issue, but all of us share the same goal, and that is to take 11 million people out of the shadows, secure our borders and make sure that this is the nation of opportunity and freedom.”