The Civics Lessons Many Undocumented Immigrants Have Already Learned 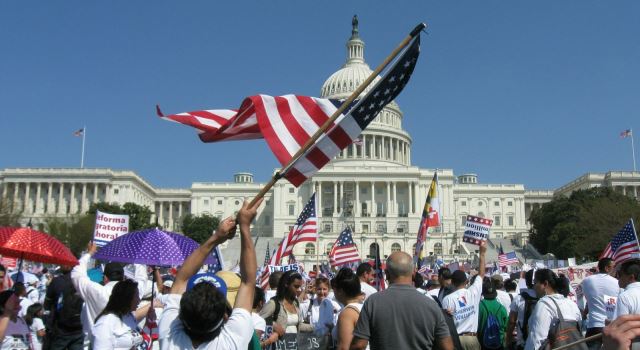 If the Senate’s comprehensive immigration reform bill becomes law, many undocumented immigrants who apply for and become Registered Provisional Immigrants (RPIs) would have to pass an English and civics test before becoming Lawful Permanent Residents (LPRs). These tests are administered so New Americans can show their commitment to this country by demonstrating that they speak English and understand the basic tenets of our democracy. Although the test is a formal set of questions about American democracy—How many branches of government? Who was the first President? What is the Declaration of Independence?—the work leading up to passage of the Senate bill was itself a lesson in democracy. For many immigrants who may one day be RPIs, their participation in efforts to pass legislation shows that they have already participated in their first civics lesson.

It is pretty clear that millions of unauthorized immigrants already get the importance of the democratic process. The DREAMers, for instance, have created vast networks of political activists—foreign-born and native-born alike—with sophisticated tools for influencing their Members of Congress. They range from traditional advocacy, including arranging meetings with Members of Congress, to letter writing campaigns to grassroots tactics like mass “graduations” on Capitol Hill. Through these actions, they are educating a generation on the importance of political involvement. The way the Spanish-language and other ethnic media reported diligently on the daily deliberations of the immigration bill—from committee to full vote—was another indication of how closely the immigrant community was watching this democratic process unfold.

Also, throughout the Senate deliberations on S. 744, immigrant families—parents, children, students, and grandparents—attended the debate in droves. From committee mark-up to full Senate debate, people were in the audience, watching and learning, tweeting and talking to the press about the Senators’ actions. As one woman noted , “We all want to stay here. . . It’s super important to see this vote.”

Immigration reform and democracy in general is not a passive business. Those who have been working for a path to citizenship for years have made an effort to continue to explain the issue and expand the network of supporters. Today, that network stretches from evangelicals and business owners to environmentalists and women’s groups. The depth and breadth of support for reform is critical, as it is with every issue. But the hurdles seemed greater in immigration reform, where the belief persisted for a long, long time that reform only mattered to the immigrants themselves. As the economic and other evidence became ever more clear, it became easier to convince people that they had a stake in the issue. That process of identifying common ground, shaping messages to attract new audiences, and inviting more people into the conversation is vital to the health of our democracy.

Ultimately, even the expanded border security in the final version of the Senate bill is a lesson in democracy in two ways. First, the necessity of counting votes and making concessions to get those votes was evident in the flurry of activity that led to the Corker-Hoeven compromise. But more importantly, the fact that so many people oppose the “border surge” language is also a lesson in what comes next. The work isn’t over when one chamber passes a bill. The House is likely to have its own version—or two or three—that may or may not include the same kind of border language. In any event, preserving the good in the Senate bill and working to prune out the bad becomes the next step and the next lesson in how our democracy works.

We don’t know how this will end. We do know, however, that the process has brought millions of people already living and working here deeper into the fold of American democracy. Their engagement in the very process that could legalize their status indicates that they already have the characteristics and traits that we hope to see in our citizens, regardless of where they were born.