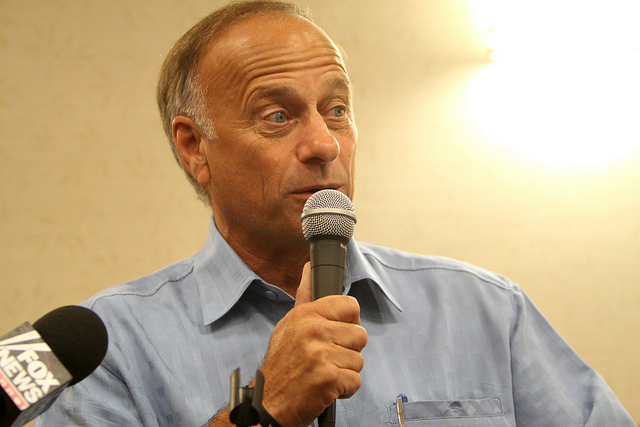 There is no denying that Rep. Steve King (R-IA) has a vivid imagination. As he sits in Border Patrol vehicles at night, he apparently sees hundreds of DREAM Act-eligible drug mules with muscular calves hauling heavy loads of marijuana across the border. How does he know these drug mules would meet the rather stringent criteria for legalization under the DREAM Act? Hard to say. How does he know these drug mules outnumber their valedictorian counterparts by a ratio of one hundred to one? No one can say. What is certain is this: when it comes to the topic of immigration and crime, nativists like King have no need for facts when there is so much fear and innuendo at their disposal. Perhaps this is because the facts are so stacked against them.

As numerous studies over the past 100 years have shown, immigrants are less likely to commit crimes or be behind bars than the native-born, and high rates of immigration are not associated with higher rates of crime.

As King’s tales of riding with the Border Patrol illustrate, advocates of the nativist cause usually rely upon anecdotes to support their oft-repeated claim that immigrants, especially unauthorized immigrants, are dangerous criminals. This mythical claim is usually based on rhetorical sleight of hand in which individual stories of crimes committed by immigrants are presented as “proof” that we must restrict immigration in general or “get tough” on all of the unauthorized in order to save the lives of U.S. citizens. While these kinds of arguments are emotionally powerful, they are intellectually dishonest. Anecdotes are not the same as evidence, and sound public policy is based on hard data, not storytelling prowess.

The tall tales of King notwithstanding, the problem of crime in the United States is not caused or even aggravated by immigrants, regardless of their legal status. This is not surprising since immigrants come to the United States to pursue economic and educational opportunities not available in their home countries and to build better lives for themselves and their families. As a result, they have little to gain and much to lose by breaking the law. Unauthorized immigrants in particular have even more reason to not run afoul of the law given the risk of deportation that their lack of legal status entails. Moreover, potential DREAMers would be barred from gaining legal status if they were found guilty of a crime. Public policies must be based on facts, not anecdotes or emotions. And the fact is that the vast majority of immigrants are not criminals.

Rep. King’s own constituents would seem to understand this fact: approximately 65 percent of them support the creation of an “earned pathway to citizenship” for unauthorized immigrants now living in the United States.