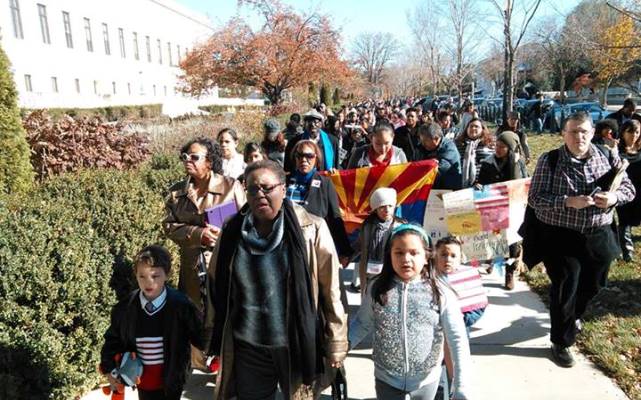 House Speaker John Boehner (R-OH) reassured a few die-hard anti-immigration reform activists when he said he would never agree to a conference to reach agreement on a House immigration bill and the Senate’s bipartisan immigration that passed in June. But his comments fired up those who want to see Congress improve the nation’s broken immigration system. Despite some in the House dragging their feet on considering immigration reform legislation—House Majority Whip Kevin McCarthy told advocates last week there weren’t enough days for them to act on it this year—immigration advocates in Washington, D.C., and across the country continued to push for the House to act on immigration reform.

Blocks from the U.S. Capitol, five religious and labor leaders launched the “Fast for Families” on Tuesday, committing to fast from food and drink until Congress passes immigration reform. Eliseo Medina from the Service Employees International Union, who is fasting, said he knows it will be difficult, but added that “there is a deeper hunger within me, a hunger for an end to a system that creates such misery among those who come here to escape poverty and violence in search of the American dream.” A table inside the tent where they are staying during the fast has reminders of those who died trying to cross into the U.S. or who have been deported and separated from their families. Along with the long-term fasters, people are joining as “solidarity fasters,” fasting for a shorter period of time both in D.C. and across the country. Officials and members of Congress—including Sen. Chuck Schumer (D-NY), Agricultural Secretary Tom Vilsack, and Salt Lake City Bishop John Wester—have gone to the tent to hear from the fasters about their mission.

And more than 100 children marched to the Capitol on Thursday to make a personal appeal for immigration reform. Ahead of the march, they joined with civil rights leaders who participated in the 1963 Children’s Crusade to tell stories of witnessing family members being arrested and deported. Organizers said the children were there “to tell Congress that the time is now for a real solution: reform with citizenship for all 11 million aspiring Americans.” On the way to House office buildings where they unsuccessfully tried to meet with Boehner and House Majority Leader Eric Cantor, the children and marchers wished  happy birthday to Boehner, whose birthday is Nov. 17. “Happy birthday to you. Happy birthday for us. Keep families together. And immigration reform for us,” the children sang. And the march was only the beginning for those pushing for House leaders to allow a vote on immigration reform, LULAC’s Sindy Benavides told NBC News. “The Latinos of today will remember that the Republican Party is standing in the way of immigration reform,” Benavides said. “They are tired of hearing excuses, we are ready for a vote.”

Outside of Washington, D.C., groups have planned events across the country to push Republicans to support immigration reform. In Washington state, police arrested a dozen protesters outside of Rep. Cathy McMorris Rodgers’ (R-WA) district office. Some of the protesters’ signs and chants were addressed to McMorris Rodgers, the third-ranking Republican in the House, but most of their criticism was directed at Boehner. Angela Solis, who was arrested, said in a statement that “I risk arrest because I want to fight for the future of my friends, my family and aspiring citizens,” according to The Spokesman-Review. In Colorado, activists rallied to push Rep. Scott Tipton (R) to support immigration reform. It is one of five events over three days that groups had planned to target Tipton. Advocates carried signs that read “Tipton America Needs Immigration Reform Now” and “Reform Not Raids.” And local organizations in Nevada plan to hold a walk for immigration reform on Saturday to draw attention back to an issue they say the House has ignored. “Every day that immigration is not a priority, is one more day that we will continue without a solution for the current system, and one more day in which families have to be separated due to deportations,” according to one of the walk’s organizers.

As House leaders delay on bringing up immigration bills for a vote, Rep. Jeff Denham (R-CA) said on Thursday that the issue is not dead. Denham was the first Republican to join HR 15, the House comprehensive immigration bill that has 191 co-sponsors, and he said he’s urging more members to co-sponsor the bill as well despite the fact that House Republican leaders will not allow a vote on it. At an event on Thursday, he criticized those who reject current immigration proposals without suggesting their own. “You’re elected to be a leader. Then lead,” he said of fellow members of Congress. Denham is right; it is time for the House to pass legislation that will fix the U.S.’s broken immigration system, and the advocates pushing for change made it clear this week that they will not back down until the House does.