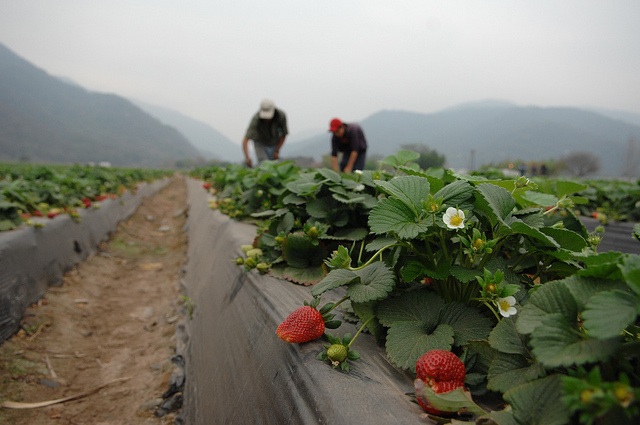 The on-the-ground harm of enforcement-only state immigration policies is clear. The “self-deportation” style laws in Arizona, Alabama, and Georgia all dealt severe blows to the states’ economies, particularly the agricultural industries. A federal enforcement-only approach to immigration reform would have a similarly harmful impact, leading to a decline in food production and higher food prices in the United States. That is the major finding of a new American Farm Bureau Federation report, which examines the impacts different immigration reform scenarios would have on the U.S. agricultural economy. According to the report, enforcement-only immigration reform “would raise food prices over five years by an additional 5 percent to 6 percent and would cut the nation’s food and fiber production by as much as a staggering $60 billion.” Fruit production would fall by 30 to 61 percent, vegetable production would plummet by 15 to 31 percent, and livestock production would decline by 13 to 27 percent, based on the Farm Bureau’s data.

In the states that tried enforcement-only approaches, there wasn’t a ready supply of skilled native-born workers waiting to take the place of departing foreign-born workers. Whether at big corporate operations or smaller family farms, many fruit and vegetable crops  are labor intensive and not easily mechanized. It takes a skilled worker to speedily assess the ripeness of a tomato, for instance, and accurately sort produce. And the work is often in hot, humid environments. Such workers are not easily replaced. After states passed anti-immigrant laws, crops went un-harvested and literally rotted in their fields, leading to significant losses. In Georgia, for example, HB 87 led to an estimated $300 million loss in harvested crops statewide and $1 billion loss in total economic impact for the state’s economy during the 2011 growing season.

Alternatively to enforcement-only immigration policies, the report finds that comprehensive immigration reform—including components of enforcement, a redesigned guest worker program, and opportunities for skilled agricultural laborers already working in the U.S. to adjust their status—would lead to virtually no effect on food prices and little impact on farm income and production. And American Farm Bureau Federation President Bob Stallman said there needs to be immigration reform that improves the current system. “Status quo is not a viable option for anyone involved in this issue, and as a nation, we expect better,” Stallman said. Currently, the H-2A nonimmigrant visa is the primary alternative to farmers’ hiring undocumented workers. Yet many observers, farm employers, and worker advocates consider the H-2A program dysfunctional. As the report indicates, “farm employers cite the cumbersome nature of the program and the high wage and benefit costs that the program imposes. Worker advocates cite inadequate protection for workers, poor housing conditions, and employer failure to live up to worker payment provisions by making prompt and full payment of wages due.”

There are immigration proposals on the table in Congress that would address some of these issues. The Senate’s bipartisan comprehensive immigration reform bill (S 744), passed in June 2013, and the House’s HR 15, introduced in October, contain proposals to reform nonimmigrant visa programs, including the proposed new W visa, blessed by both business and labor interests. Even the recently released GOP principles on immigration reform acknowledge there is more to be done to fix immigration than simply addressing enforcement. Specifically, S 744 and HR 15 contain a W visa program that is more flexible and less bureaucratic than the current H-2A program, while providing protections for both foreign and U.S. workers. And the Senate bill also provides a legalization program for agricultural workers that would allow farmers to keep the experienced but undocumented workers upon which many agricultural employers currently depend.

Through thoughtful, comprehensive immigration reform that addresses updates to immigration pathways and encourages immigrant integration, farm employers will be able to more efficiently hire the workers they need, workers will have the protections they need, and a large segment of the population will be able to live out of the shadows, better able to integrate into the communities in which they already live and work.