House Limits Administrative Action Instead of Acting on Immigration Reform 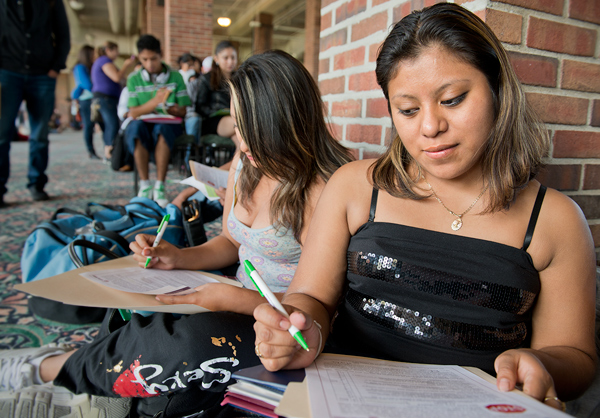 Work on existing bills that lay out legislative options to fix the nation’s immigration system is languishing in the House while its members focus on legislation that rolls back the president’s power to help immigrants caught in the broken system. Following up on Wednesday’s vote to approve the ENFORCE Act (HR 4138), the House on Thursday passed the Faithful Execution of the Law Act (HR 3973) by a vote of 244 to 171. Neither bill has any chance of passing the Senate nor being signed into law by President Obama, which makes these actions more about politics than policy.

The floor votes to limit administrative action comes on the heels of the House Judiciary Committee’s approval of a bill to prohibit funding for a public advocate position within the U.S. Immigration and Customs Enforcement’s (ICE) that works to help immigrants in deportation proceedings. The committee’s vote was the first one of the year on an immigration bill, and House leadership followed it up with votes on measures targeting the president’s authority to exercise prosecutorial discretion—long recognized as a critical part of U.S. law—in immigration cases.

The ENFORCE Act gives either chamber of Congress standing to bring a civil action in U.S. district court if the president fails to enforce the law pursuant to the Constitution. HR 3973 limits administrative action by expanding the requirement of when the Department of Justice has to report to Congress because it is not enforcing a law considered unconstitutional. Under the House-passed bill, that requirement applies to all federal officers (including presumably the president) and to any circumstance.

But these attacks on executive power are also attacks on immigration policies, like the Deferred Action for Childhood Arrivals (DACA), that use prosecutorial discretion or parole in place to prevent immigrants with deep roots in U.S. communities from being deported. According to the House Judiciary Committee’s report about HR 3973, DACA is one reason why House members should vote for the bill. “For instance, while Congress is currently debating how to reform our immigration laws, the President effectively enacted the DREAM Act himself by ordering immigration officials to stop enforcing the immigration laws against certain unlawful immigrants,” the report explains. During debate about the bill, Rep. Zoe Lofgren (D-CA) questioned if HR 3973 would require Congress to be alerted of each applicant approved for DACA, as well as releasing their names, which could open them up to harassment.

The two bills’ attempt to threaten the DACA policy by limiting executive action is also out of step with the immigration principles House leadership released in January, which call for young undocumented immigrants brought to the U.S. as children to receive eventual citizenship. “This is another attack on immigrant communities by my colleagues on the other side of the aisles,” Rep. Linda Sanchez (D-CA) said about the ENFORCE Act. “It’s proof that their actions don’t match their rhetoric.”

Just today, House Speaker John Boehner said immigration reform is “important and ought to be dealt with.” But the House’s actions to limit presidential powers instead of dealing with immigration reform do not align with  Boehner’s words. It is time for the House to consider legislation to improve U.S. immigration policies and create a path to citizenship for the nation’s 11 million undocumented immigrants instead of targeting administrative actions that provide some deportation relief.