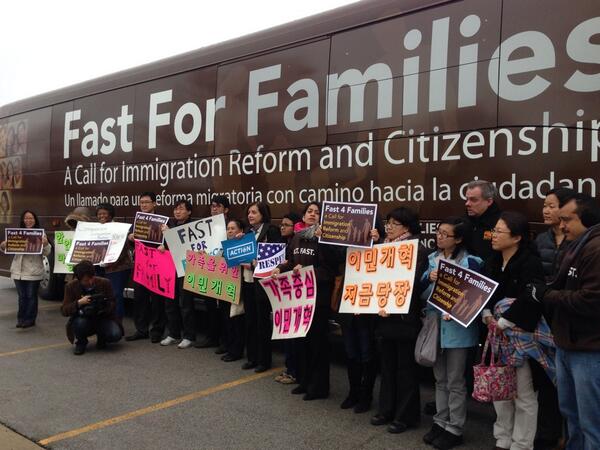 While Congress is on recess and members travel home to their districts to hear from their constituents on the issues that matter to them, immigration advocates are turning up the heat through a series of grassroots and netroots organizing events.

Today, the Alliance for Citizenship is organizing a national digital day of action, encouraging supporters to share a common image on Facebook, tweet at House leadership and the President using the hashtag #2million2many, as well as use Instagram and Vine for sharing their videos about the need for immigration reform and relief for families in the meantime.

The Fast for Families has taken their fast from the National Mall to communities across America via a bus tour to push for immigration reform. Two busses left Los Angeles on February 24 and will end the trek in Washington, D.C., on April 9 after visiting dozens of cities, including Janesville, Wisconsin, an area in Rep. Paul Ryan’s district and Birmingham, Alabama, where they spent time visiting Rep. Spencer Bachus’ office.

Add to that, more than 1,200 women across the country who are participating in 24 hour fasts this month to push for better immigration policies, “uniting women hungry for common sense immigration reform,” according to the We Belong Together campaign. The 30 days of fasts—which began on March 8, International Women’s Day—will end with 100 women joining in a 48-hour fast April 7 and 8 in D.C. Advocates have argued that immigration is also a women’s issue because “women and children bear the brunt of the burden from a broken system.”

Additionally, immigrant detainees in Washington State and Texas have been on a hunger strike to protest deportations. The detainees are being held at private prisons in each state owned by the GEO group. Three people at the Northwest Detention Center in Tacoma, Washington, were still fasting last week after 1,200 people out of the center’s 13,000 detainees began participating in the hunger strike on March 7. Following the Washington State protest, detainees at the Joe Corley Detention Center in Conroe, Texas, began their hunger strike just after midnight on Monday. According to Free Speech Radio News, Adelina Cáceres said her husband, David Vásquez, is participating in the hunger strike in Texas. She said he is a legal permanent who ICE officials detained almost a year ago because of a prior charge for which Vásquez had already served time.

There is no doubt that Congress must pass laws that permanently reform the immigration system, and President Obama has called for a review of what could be done to make the immigration enforcement system more humane in the meantime. These ongoing actions across the country show both the human toll of the broken immigration system as well as the wide support for federal actions to improve the nation’s immigration policies.