Over 100 Faith Leaders Arrested in Protest Against Record Deportations 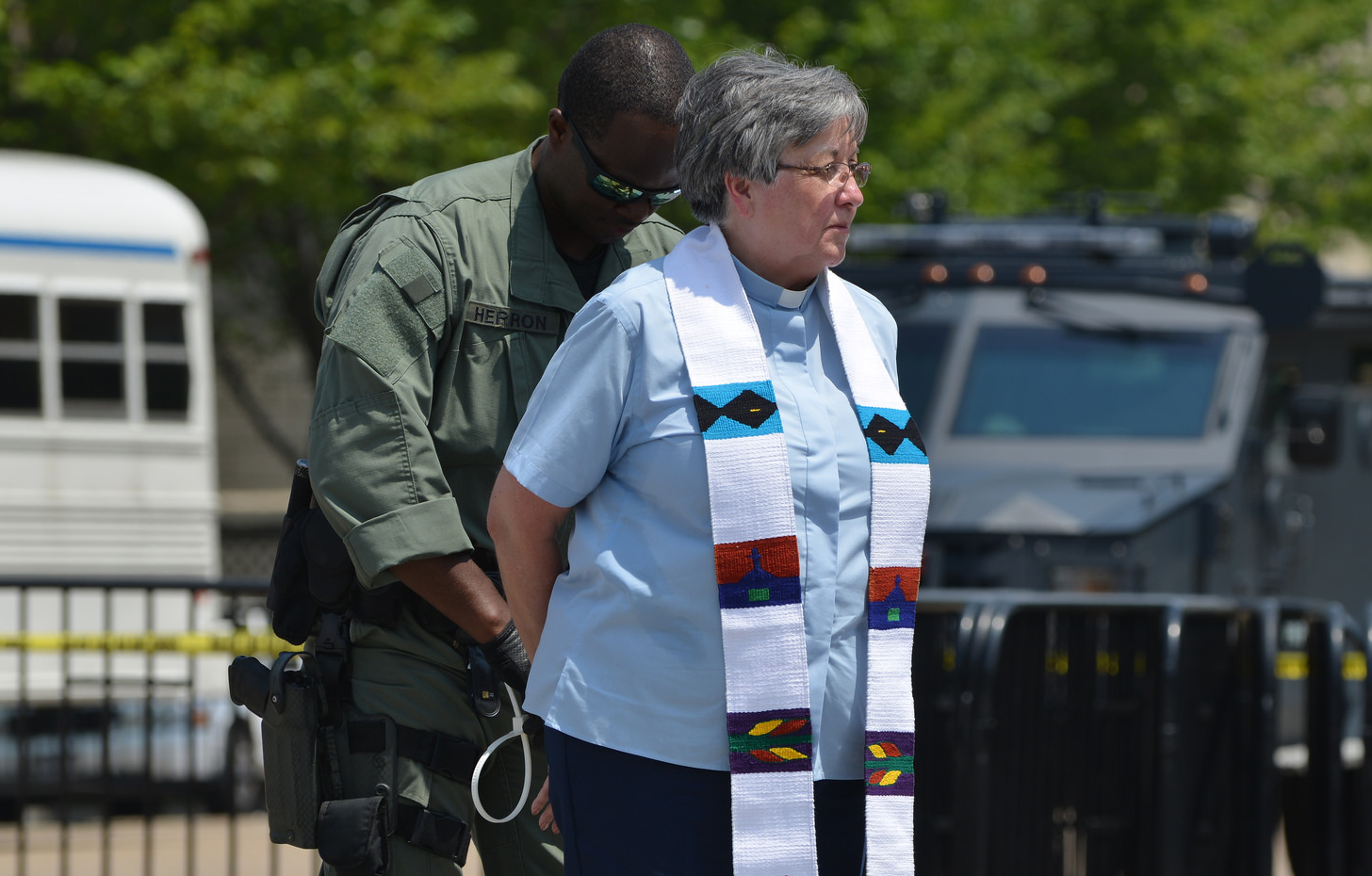 Nuns, pastors, rabbis and other faith leaders were arrested outside the White House on Thursday in a massive act of civil disobedience to press the Obama administration to end the 1,100 deportations that occur every day. “Too many families have been separated. Too many tears have been shed because of our unjust laws,” Reverend John McCullough, CEO and president of Church World Service, said before a crowd of 500 supporters congregated in Lafayette Park.

Frustrated with the lack of action on immigration reform by both Congress and the administration, interfaith groups, including Unitarian Universalist Association, the United Methodist Church and the Sisters of Mercy, said civil disobedience was necessary to bring a prophetic voice in the midst of a legislative impasse.

“We’re not hearing a moral voice from Congress or the White House,” Bishop Minerva Carcaño of the United Methodist Church told the crowd. While congressional leadership has stated they do not intend to bring any type of immigration legislation to a vote, “President Obama has the chance to go on the right side of history,” Carcaño said.

Family values were front and center for demonstrators at Thursday’s action, with faith leaders emphasizing how current immigration laws are damaging communities and tearing up families.

“We share the pain of mothers separated from their children and fathers who have risked their lives for love of their families. It has to end. We have to stop separating families and breaking the hearts of children torn from the arms of their parents. It has to stop. If Congress won’t act to end the suffering and injustice, then the President must,” Sister Ann Scholz, Associate Director for Social Mission at the Leadership Conference of Women Religious, said in an interview.

It is estimated that 5.5 million children in the United States, including 4.5 million U.S.-born citizens, live in mixed-legal status families with at least one parent who is undocumented. Between 1997 and 2007, more than 108,000 parents of U.S.-citizen children were removed.

“This is the moment when Obama has the time to use his executive power. We can’t take any more of the deportations and the injustices of our immigration system. It’s completely broken,” Sister Eileen Campbell, Vice President of the Sisters of Mercy, said in an interview.

Instead of continuing to deport record numbers of undocumented immigrants, McCullough also urged the administration to broaden the Deferred Action for Childhood Removals (DACA) program: “More than 600,000 can now work and travel legally and are improving their communities as a result. This is a model that should be expanded.”

Recent reports indicate that the administration may be aiming to bring relief to millions of undocumented immigrants based on the DACA model. Introduced in 2012 those with DACA have made tremendous gains. A study by the American Immigration Council showed almost 60 percent of DACA recipients obtained a new job since receiving DACA, and 45 percent have increased their earnings, broadening the tax base and boosting our economy.

According to a report in the Los Angeles Times, up to 5 million of the 11 million undocumented immigrants could benefit from the administrative relief the White House is considering.

“We can go to college like I’m doing now. We can work hard and get ahead,” said Misa Garcia, a member of Casa de Maryland, which sponsored the action. Garcia is a DACA recipient and is now in his second semester studying business administration at Baltimore City Community College. In the future, he hopes to open his own business.

With any hope of immigration reform this summer effectively diminished as Congress leaves for the August recess, advocates are beginning to escalate their actions. Throughout the weekend, additional demonstrations are planned to put pressure on the administration to offer broader relief for families and bring justice to those who suffering from record deportations. Thursday’s action by people of faith bearing witnesses to the injustices inflicted on immigrant families reminds us all that there is a moral imperative to fix our broken immigration system.