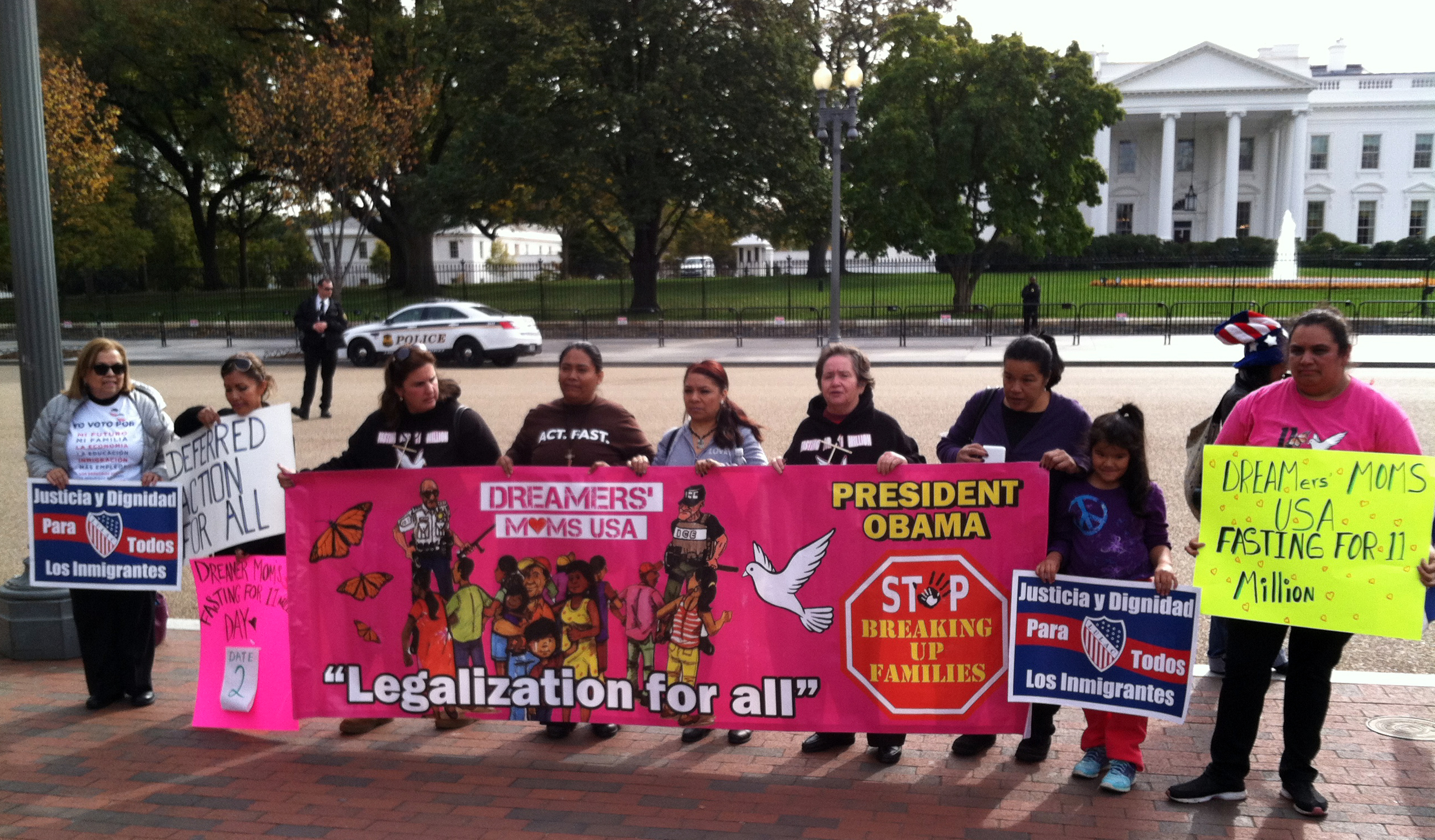 President Obama back in September pushed off taking administrative action on immigration until after the midterm elections were over. “The president believes it would be harmful to the policy itself and to the long-term prospects for comprehensive immigration reform to announce administrative action before the elections,” a White House official said at the time. Now it’s Election Day, and as voters across the country go to the polls, immigrants have not forgotten the post-election deadline. That is why 10 mothers and one father of U.S. Citizen children and children brought to the U.S. as children, or “DREAMers,” have come together to fast and ask President Obama to keep his promise and provide administrative relief for the 11 million undocumented immigrants living in the U.S.

The fasters began their vigil on Monday in front of the White House. Part of the organization Dreamers’ Moms USA, they come from all across the country—Connecticut, Virginia, Arizona, California—and are joined by more mothers who are fasting in San Diego and Tijuana. Alejandra Sanchez, an undocumented mother of one U.S. citizen and four children who are DREAMers, said through a translator that they plan to fast for “as long as it takes.” Sanchez added that they are specifically pushing for deportation relief for the parents of U.S. citizens and young DREAMers, and they have invited First Lady Michele Obama to join them as a fellow mother.

Lenka Mendoza, another mother who is fasting, said they are fasting now to ask President Obama for relief after Congress failed to pass comprehensive immigration reform. She has lived in the U.S. for 14 years, and she and her husband, who is also undocumented, have two children who came to the U.S. when they were young and one who is a U.S. citizen. Mendoza said through a translator that she knows administrative action is not a permanent solution to the nation’s broken immigration laws, but said, “It’s a breather” while they wait. “I’m not the only one. There are millions of moms like me,” Mendoza said.

But Mendoza, a Virginia resident, said she feels like she’s just a number to the lawmakers making decisions about the futures of undocumented immigrants in the U.S. She lives, works, and pays taxes in Republican Rep. Bob Goodlatte’s district. She said she went to him last year for help so that she could travel to Peru to see her cancer-stricken mother for the first time in 13 years without being blocked from re-entering the U.S. Instead of assisting her case, Mendoza said Goodlatte told her she was a criminal who didn’t deserve to be in the United States and that she should leave. She said she doesn’t want special treatment, simply a way that she and millions of other aspiring citizens could get in line for legal status. “It’s not amnesty; it’s reform” that they want, Mendoza said.

There are almost 4 million undocumented immigrants who are the parents of U.S. citizens or young immigrants who have temporary legal status through the Deferred Action for Childhood Arrivals program, and they live in fear of deportation. Sanchez, for example, is in deportation proceedings. Mendoza will have to go to court in a month after she was caught in a traffic stop, and she fears she could be put in deportation proceedings afterwards. Temporary relief through administrative action would give both women as well as millions more a reprieve from the fear of being separated from their children while they wait for a more permanent fix from Congress. That is why Sanchez, Mendoza, and the other parents are in front of the White House waiting on President Obama to uphold his promise to act.