How Immigrants Contribute to the U.S. Military 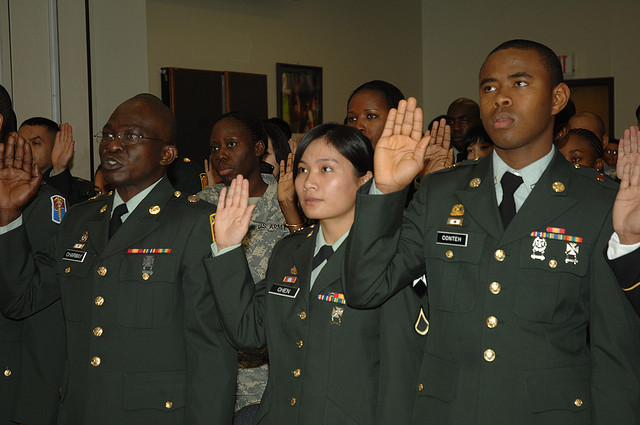 Just as immigrants have roots in communities across the country, they are also found throughout the ranks of the U.S. military, fighting on the front lines and shaping policy in the Pentagon. The importance of the myriad roles that immigrants play in the armed forces has only increased since 9/11. In recognition of their service, tens of thousands of foreign-born military men and women have been offered, and taken, an expedited path to U.S. citizenship. These two decisions—to join the U.S. military and to become U.S. citizens—are perhaps the most powerful signs of full-fledged integration into the social fabric of the United States.

As Margaret Stock, a 2013 MacArthur fellow and retired Lieutenant Colonel in the Military Police, U.S. Army Reserve, explains, “it has long been an American tradition that service in the armed forces can lead to U.S. citizenship,” particularly during times of war. Without immigrants who fill the needed positions of interpreters and cultural experts, Stock notes that “the military could not meet its recruiting goals.”

Behind those numbers are people. Take two recent Army graduates who are now U.S. citizens for example. Christian Albert De Leon and Giessen Cruzado, both of whom are from the Philippines, joined the military through the Military Accessions Vital to National Interest (MAVNI) program, which the military uses to recruit immigrants on non-citizen visas who have specialized language skills or in-demand training. De Leon came to the U.S. in 2010 as a dependent on his wife’s H-1B visa before the military recruited him through MAVNI in 2013. “The future looks bright for me and my family,” said De Leon.

Immigrants show their commitment to the United States in innumerable ways, starting with the decision to leave behind their home countries in order to put down roots here. They go on to buy homes and raise families in this country, and perhaps start a business as well. Some will even aspire to public office. And a highly motivated few will volunteer to put their lives on the line and fight for the country they have chosen to serve.