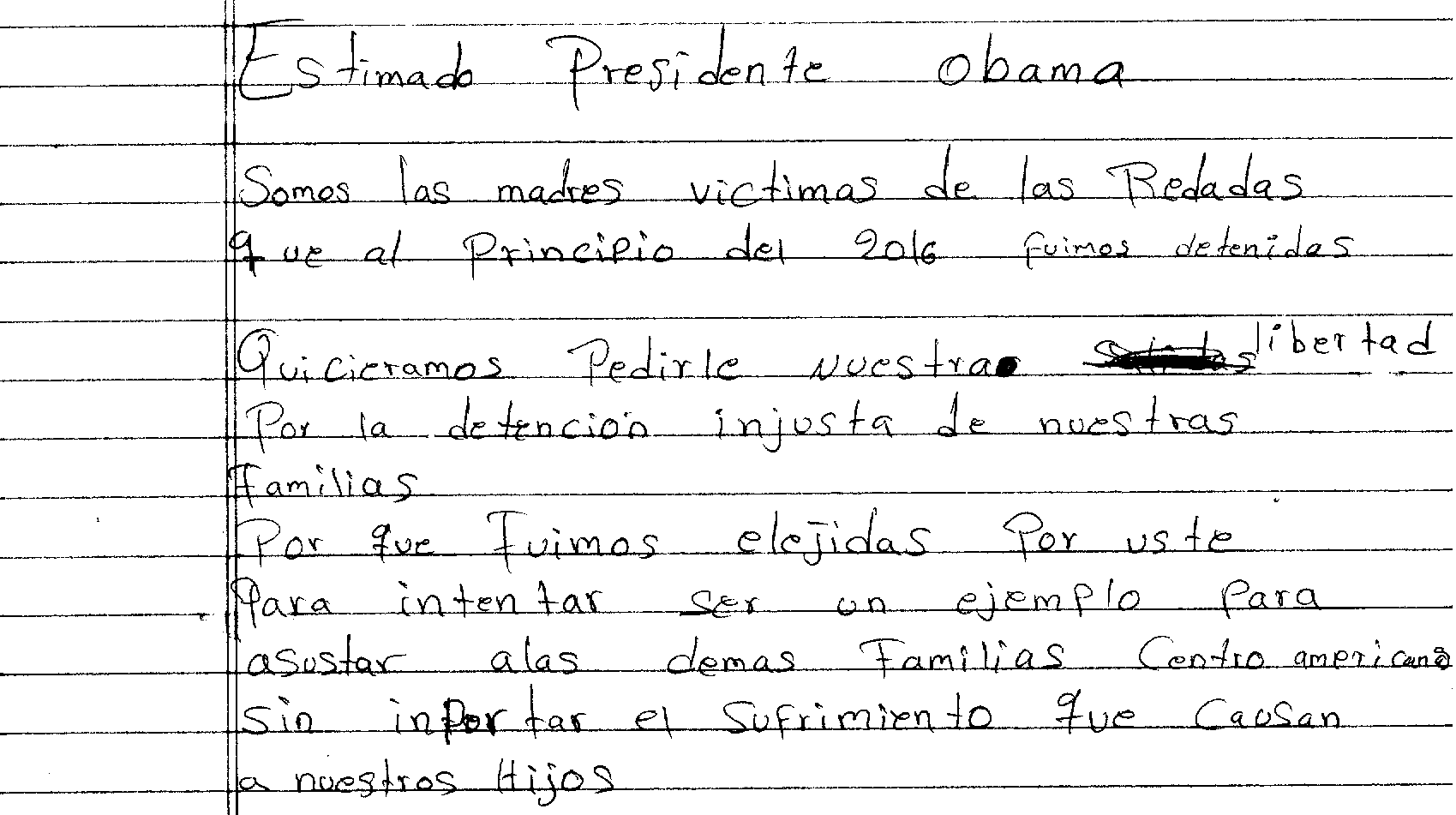 Seven mothers that have been held for four weeks in a family detention facility in Dilley, Texas penned a letter to President Obama asking him to release them and their children while they work through the immigration appeals process. These women and their kids were among those picked up and detained by Immigration and Customs Enforcement in early January in widely-publicized raids.

The women obtained temporary stays of their deportation orders with the help of attorneys from the CARA Family Detention Pro Bono Project based at the South Texas Family Residential Center in Dilley, Texas nearly a month ago. Despite the stays issued by the Board of Immigration appeals the women remain in detention, some at Dilley and others at the Berks Family Residential Center in Leesport, Pennsylvania.

The women, including one who has had multiple seizures and poor medical treatment while in custody, have expressed their frustrations in a handwritten letter to President Obama. The women are pleading with the President to release them from detention and allow their children to return to their schools while their legal appeals proceed.

We are the mothers who are victims of the raids who were detained at the beginning of 2016. We would like to ask you for our freedom from the unjust detention you have imposed on our families. Why did you choose us to make an example of to frighten other Central American families, with no regard for the suffering it causes us and our children?

Instead of giving us and our children the resources to have a chance at winning our cases, you have used us and made us more vulnerable. We complied with everything that was asked of us, but it was the system that failed us, just because we came to this country to seek protection, because we couldn’t go back to our countries of origin due to being exposed to so much violence and threats against us and our children. That’s why we came to this country to request asylum.

Mr. President, your ICE agents deceived us, telling us we didn’t have a right to legal counsel, and they used lies to get us to go with them to ICE offices. The Board of Immigration Appeals approved our requests for protection, and we are still jailed in this place. We have been detained for almost 30 days, and that implies you are violating our rights.

We demand a response to our cases. It is an injustice that our children are detained and are missing the school year. Being detained has affected us and our children a lot, because of the mistreatment we have received from the authorities, and the frustration it has caused us. We are not criminals who you have to keep locked up. We have not committed any crime and it is unjust that our children, at such an early age, know what it’s like to be in a jail under guard 24 hours, when at this moment they should be in school living life with dignity like every child deserves to. This is why we ask you to protect the rights we all have.

We hope for a positive response and that we can be returned to our homes in the USA that ICE took us from without caring about the suffering it caused and in violation of our rights.

As a result of being detained, some families have lost their homes.

Please, take us out of this detention center because we and our children are sick with depression and in psychological crisis. We need to be free like human beings to be able to fight our cases outside with dignity.

The CARA Pro Bono Project continues to provide legal assistance to families held at the Dilley facility, while advocating for an end to family detention.

View text of the letters in English and Spanish.