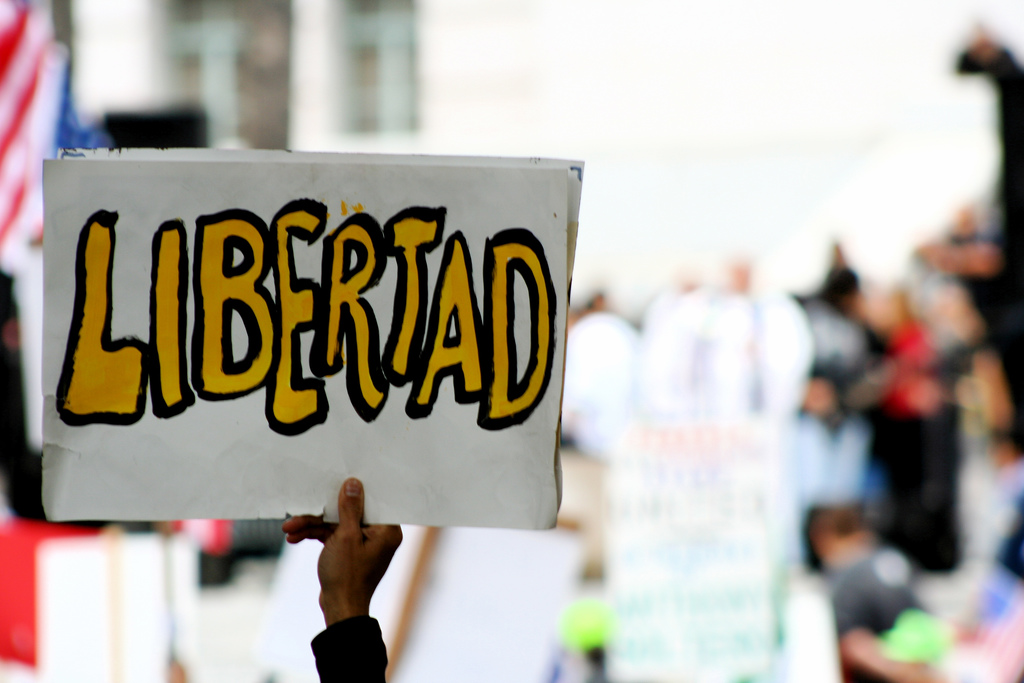 Advocates, community members, and attorneys gathered outside the Berks County Family Residential Center in Leesport, Pennsylvania on Monday to protest the continued operation of the center. The center was open for business as usual, with approximately 81 parents and children currently detained, despite the fact that the center’s license to operate as a childcare facility expired Sunday. A recent group tour I took of the detention center confirmed for me that the Pennsylvania Department of Human Services was right–it is no place to hold children.

As my group began our tightly controlled tour of the center, we walked through freshly waxed corridors—which the mothers told us hadbeen cleaned just the day before our visit—a band of toddlers followed us from room to room. The children, ranging in age from one to four-years-old, wore signs written in colored pens and taped on their fronts and backs that translated into English as “Freedom! Freedom!” and “Six months of detention. No more!” and “We are not criminals.”

Later in the tour, hanging in the doorways of the detention center’s classrooms, we saw some of the school projects of older children being detained there . Hanging on cloud shaped cut outs decorated with glitter were the children’s “Dreams for the World.” The project included three “dream clouds.” Each child inevitably included one dream along the lines of, “I want to be with my dad” or “I want to be with my family,” poignantly highlighting that family detention is a misnomer as it so often separates rather than keeps families together. Another common theme was “I want gangs to stop killing people,” or “I want my country to be better” and “I want less violence in the world.” This theme reflects what the overwhelming majority of these Central American families flee when they seek protection here in the United States.

But, being detained at the Berks detention center has brought no end to the trauma these children endure. Every night, detention center staff wake the children and their parents every fifteen minutes, shining flashlights in their eyes, conducting sleep checks that they claim are mandated under state childcare regulations. Under the same state regulations, children, even toddlers, are not allowed to sleep in the same bed as their parents. One father, recently released from detention, told us that he begged the staff to allow his two-year-old to at least fall asleep in his arms, and then move him to his own bed, but “for safety reasons,” the staff refused.

Children we interviewed expressed concern about the medical care they received at the center. Two children explained that they had untreated tooth pain and had been waiting weeks to see a dentist to have fillings replaced. This is nothing new and complaints about inadequate care in family detention centers have been filed in July and October last year.

Unsurprisingly, several of the mothers we saw in the detention center had bloodshot, tear-filled eyes. One thirteen-year-old-girl and her mother told us that it feels like they are living in a nightmare. Another mother worried that her eleven-year-old-son was losing out on his education, having been detained already for six months and in class with children two or three years younger than him.

Berk’s license was officially revoked Sunday, but the county has appealed the state’s revocation of the license. It remains to be seen whether the U.S. Department of Homeland Security will release or transfer the families currently detained and stop sending new families to the now unlicensed detention center.

No photography is allowed on tours of the detention center, but the image of a band of eight toddlers, all holding hands, standing in a line and blocking our path, will forever be etched in my memory. “Nos tratan mal,” (They treat us badly) said the sign on the chest of a little boy, and “Libertad por favor” (Freedom, please) said the sign on the back of the little girl next to him.

These courageous children and their parents have endured far too much, for too long. The State of Pennsylvania made the right move when it refused to continue to play a part in the detention of children and families. Let’s hope that the federal government hears this message, no matter how small the messengers, and ends family detention, once and for all.