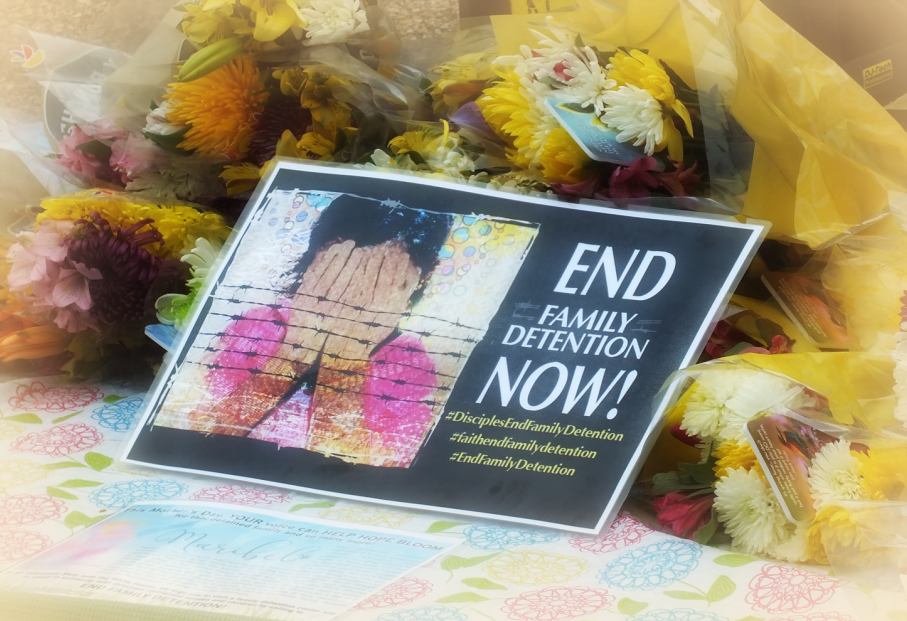 Mothers who risked everything to flee horrific violence in their home countries, only to be held in immigration detention, gathered alongside advocates in front of the White House earlier this week in honor of Mother’s Day. The event, “Let Hope Bloom,” called on mothers in the administration to immediately visit immigration detention centers run by private prison corporations and to join the call to end family detention.

Statements were read from mothers currently detained in Dilley, Texas, with one mother stating poignantly, “Being a mother means loving your children, wanting the best for them, protecting them from any danger.”

Reverend Sharon Stanley-Rea and Delegate Ana Sol Gutierrez (Montgomery County Maryland) both spoke passionately about the outrageous detention of asylum seeking families. Lindsay Harris of the American Immigration Council also shared her experiences working with families in Dilley, Texas, in October 2015, some of whom remain detained, eight months later, in Berks, Pennsylvania.  The group of advocates, from a broad coalition including the CARA Project partners, National Latina Institute for Reproductive Health, RAICES, and the Unitarian Universalist Service Committee, then delivered giant Mother’s Day cards to White House staff for the mothers in the administration.

The event follows an intense week of activity in the family detention arena.

Pressure has been mounting on the Obama administration to end ICE’s practices of sweeping up Central American families in raids and housing children and their parents in detention centers, including statements by both Democratic Presidential candidates.

This Mother’s Day, hold a thought for the mothers currently held in immigration detention centers and for those released and pursuing their claims for protection in the U.S. and attempting to recover from the trauma of their incarceration with their children.  Next Mother’s Day, let’s hope that asylum seeking mothers will be free to celebrate with their children outside secure immigration detention centers.